Wednesday's result was the second surprise English League Cup semi-final first leg scoreline in as many days, if not as great an upset as fourth-tier Bradford City's 3-1 defeat of Premier League Aston Villa on Tuesday. 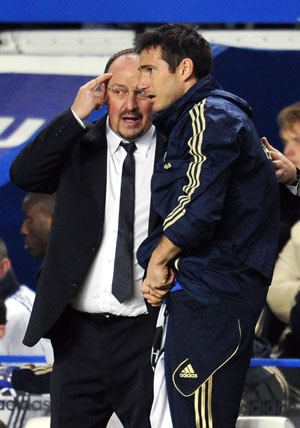 Rafael Benitez insisted Chelsea had been unlucky after a 2-0 defeat in their League Cup semi-final first leg tie by Premier League rivals Swansea at Stamford Bridge on Wednesday.

Both Swansea goals in a backs-to-the-wall effort came as a result of two errors by Chelsea defender Branislav Ivanovic.

In-form Spanish striker Michu, signed for just £2 million ($3.21 million, 2.45 million euros) from La Liga side Rayo Vallecano, scored his 16th goal of the season in the 39th minute with a curling shot from the edge of the box after Ivanovic miscontrolled the ball.

And in stoppage time, shortly after Chelsea substitute Demba Ba had had a penalty appeal turned down on his home debut, Swansea's Danny Graham scored for the fourth match in a row after another Ivanovic mistake.

But the Spaniard insisted any hostility directed at him was beside the point.

"You (the media) analyse all these things because we lost," he said. "But the way we played, the chances we created, is what we have to do.

"I think the team were doing really well, had a lot of chances and could have scored two or three in the first half, but made two mistakes and paid for them. That is the reality.

"The team are doing well. You can lose a game and then analyse it, but if you play this game 10 times maybe you will win nine of them."

However, the former Liverpool manager added: "Swansea have a great advantage (in the tie), but if we go there and score one goal we can see what happens. The team is doing a lot of good things and hopefully we can carry on improving."

Wednesday's result was the second surprise English League Cup semi-final first leg scoreline in as many days, if not as great an upset as fourth-tier Bradford City's 3-1 defeat of Premier League Aston Villa on Tuesday.

Now Welsh side Swansea will look to seal their tie against European champions Chelsea in the second leg at the Liberty Stadium on January 23, with the prospect of an improbable final against Bradford in their sights.

"We had to defend a lot, they had a lot of possession but to be honest they only had three good chances all night," the Denmark great added.

"They gave us two goals but you have to score them. It was a marvellous fight, we are a team that always try to play but when you play the European champions away you have to change.

"There is still a mountain to climb, Chelsea have so much quality. We will have to play with the same intensity, they can still win and can score three or four goals against us."

Comments
Topics mentioned in this article
Football Barcelona Liverpool Arsenal Aston Villa Atletico Madrid Swansea City Spain Croatia Dmitri Michurenkov Branislav Ivanovic Demba Ba Fernando Torres
Get the latest updates on ICC T20 Worldcup 2022 and CWG 2022 check out the Schedule, Live Score and Medals Tally. Like us on Facebook or follow us on Twitter for more sports updates. You can also download the NDTV Cricket app for Android or iOS.