Akram Afif was targeted by bottle-throwing Emirati fans as he tried to take a corner. 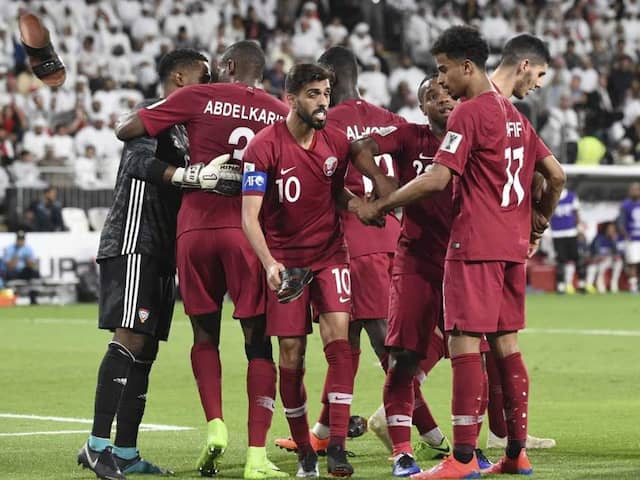 As they celebrated victory and a record sixth clean sheet at a single Asian Cup, shoes were thrown at them and plastic bottles rained down from angry local fans -- as they had for every Qatar goal, midfielder Salem Al-Hajri hit on the head after their third.

Shameful and disgusting scene at the @afcasiancup semifinal

A clash bristling with simmering regional tension over the long-standing Gulf blockade of Qatar quickly burst into life as a meaty tackle from Bandar Al-Ahbabi on Akram Afif put the Qatari midfielder up in the air.

But Qatar drew first blood after 21 minutes when Khoukhi's shot squirted under UAE goalkeeper Khalid Eisa, to the horror of a hostile crowd of 38,000.

Afif was then targeted by bottle-throwing Emirati fans as he tried to take a corner, appealing desperately to the referee as he stepped away from the kick.

Qatar exacted swift retribution eight minutes before the break, Ali smashing home a right-footed shot from the edge of the box to equal Ali Daei's 1996 record of eight goals in a single Asian Cup.

As the Sudan-born striker celebrated with his team mates, more bottles and shoes were flung at the players as the atmosphere began to turn sinister.

A half-time entertainer sang "Let's bring Asia together" but there was little harmony as the crowd -- boosted by mass giveaways exclusively to locals -- continued to hurl abuse at the Qataris.

UAE almost pulled a goal back after the interval when Ali Mabkhout's deflected shot forced Saad Al-Sheeb into a fingertip save before substitute Ahmed Khalil also tested Al-Sheeb's reflexes.

But Qatar never looked seriously threatened and captain Al-Haydos coolly chipped in a third to spark more fury from the UAE fans, Al-Hajri knocked to the ground as more missiles streamed onto the pitch.

Defender Ismail Ahmed was then shown a red card in stoppage time for an elbow on Al-Hajri before Ismaeil added a fourth to compound UAE's misery.