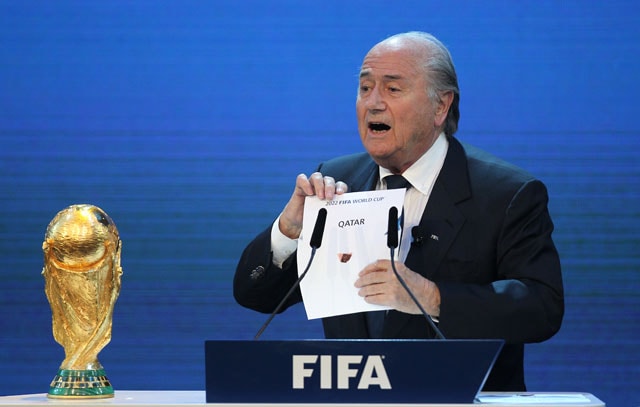 He was then on the executive committee of FIFA, the sport's global governing body.

Bin Hammam, who launched an abortive challenge against incumbent FIFA president Sepp Blatter, resigned from his FIFA and AFC posts in 2012, shortly before he was banned for life from football administration by FIFA's ethics committee.

FIFA is investigating the 2010 vote that awarded the 2022 World Cup to Qatar and the 2018 tournament to Russia, following previous corruption accusations.

A report by Michael Garcia, a top US lawyer, is to be finalised this year.

He was due to meet senior officials from the Qatar 2022 organising committee in Oman on Monday.

In their response to the allegations, the Qatar 2022 Supreme Committee for Delivery and Legacy said their bid "upheld the highest standard of ethics and integrity".

Bin Hammam "played no official or unofficial role" in the bid committee, they said.

They said they were cooperating with Garcia and were "totally confident" that an "objective" inquiry would conclude Qatar won "fairly".

"We vehemently deny all allegations of wrong-doing. We will take whatever steps are necessary to defend the integrity of Qatar's bid," it said in a statement.

"The right to host the tournament was won because it was the best bid."

The allegations come just days ahead of FIFA's annual congress, to be held in Sao Paulo between June 9 and 12, where Blatter is set to announce his candidacy for a fifth four-year term.

The decision to give the World Cup to Qatar, a small Gulf peninsula with little football history, provoked widespread condemnation because it will be held in the emirate's summer.

Blatter said in May that it was a mistake to choose Qatar because of the summer desert heat and wants the tournament switched to the northern hemisphere winter, for the first time, to get round the problem.

The Sunday Times put some of the cache of leaked documents online.

The broadsheet said Bin Hammam had made payments of up to $200,000 into accounts controlled by the presidents of 30 African football associations, and hosted hospitality events in Africa at which he handed out further funds, to get backing for Qatar's bid.

Bin Hammam also paid $1.6 million into bank accounts controlled by Jack Warner, the former FIFA vice-president, $450,000 of which was before the vote for the World Cup, The Sunday Times said.

British media have made repeated allegations about Qatar's campaign to secure the tournament.

Two months ago, The Daily Telegraph alleged that a company owned by Bin Hammam had paid money to Warner.

Bin Hammam did not respond to questions from The Sunday Times and his son declined to comment on his behalf, the weekly said.

The new allegations will place FIFA under fresh pressure to re-run the vote for the 2022 World Cup hosting rights.

Jim Boyce from Northern Ireland, one of FIFA's eight vice-presidents, told BBC radio he would be in favour of doing so if allegations of corruption in the Qatar bid were proven.

If Garcia finds "wrongdoing", then Boyce said he would have "absolutely no problem whatsoever if the recommendation was for a re-vote".

In the original December 2010 contest to host the tournament, Qatar received 11 votes, South Korea four, the United States and Japan three each, and Australia one in the first elimination round.

Qatar beat the United States by 14 votes to eight in the final round.