There was plenty of criticism laid at Mourinho's door, not just for defeat on Friday night, but for his three-year spell in charge which has delivered just the league title last season and the 2011 Copa del Rey in terms of major trophies. 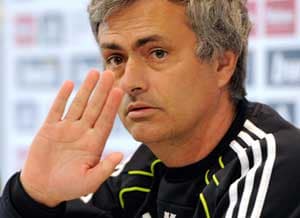 The day after Atletico Madrid ended 14 years of hurt to finally beat Real Madrid 2-1 and lift the Copa del Rey at the Santiago Bernabeu, the Spanish press was left to reflect on a disappointing season for Los Merengues and almost certainly the final chapter in Jose Mourinho's time in charge of Real.

Mourinho and Cristiano Ronaldo, who had headed Real into an early lead, were both sent off as they reflected their side's frustration on a night in which they were left to rue a number of missed chances as goals from Diego Costa and Miranda eight minutes into extra time handed Atleti an unlikely victory.

"Atleti already have their tenth," was the headline in Madrid sports daily AS, as Atleti sealed their 10th Copa del Rey, whilst Real's wait for a 10th European Cup continues.

The other Madrid sports daily Marca, meanwhile, reflected on Mourinho's behaviour on its front page as he didn't go up to collect his loser's medal after being sent from the touchline and admitted afterwards that he "had failed this season."

Overall there was praise for the way in which Atleti kept their composure as they rallied a Real storm in the second half with the hosts self-combusting after hitting the post three times with the score locked at 1-1.

"Madrid began to run out physically and emotionally," wrote Santi Segurola in Marca. "Madrid's game was defined by the sendings-off for Mourinho and Cristiano, the two flagships of a team that has entered into a lamentable spiral after their elimination from the European Cup.

"Atletico kept their temperament. They didn't concede the opportunity that Madrid looked for. Not this time. They beat their old rival on the best day possible and in the dream scenario."

And there was plenty of criticism laid at Mourinho's door, not just for defeat on Friday night, but for his three-year spell in charge which has delivered just the league title last season and the 2011 Copa del Rey in terms of major trophies.

"Madrid returned to the formula that Mourinho prefers. He prepared to defend in his half and take advantage of Atletico's errors on the counter-attack. He didn't achieve it. As has been habitual in the majority of the big games for Real Madrid, especially the semi-finals of the European Cup," continued Segurola.

"The marriage of convenience between a top club and a top manager has ended in a sad divorce," wrote Miguel Serrano, also in Marca.

Whilst in AS, Juanma Trueba described Atleti's win as "pure Atletico, pure Mourinho.

"The cup is deservedly theirs, and without knowing if their triumph will open a new age for Atletico, something is sure: it closes the dark journey of Mourinho through Real Madrid."

Interestingly, Diego Torres in El Pais also suggested that the team talk at half-time in extra time, with Mourinho having already been sent from the technical area, was a symbol for a whole campaign in which the big characters in the dressing room have prevailed.

"With Mourinho expelled, in the middle of the Madrid huddle it was (Sergio) Ramos, (Iker) Casillas and (Xabi) Alonso giving the talk. It was a symbolic prelude to the end of a harrowing season in the dressing room and a badly played one on the field."

Comments
Topics mentioned in this article
Football Atletico Madrid Real Madrid John Terry Cristiano Ronaldo
Get the latest updates on ICC T20 Worldcup 2022 and CWG 2022 check out the Schedule, Live Score and Medals Tally. Like us on Facebook or follow us on Twitter for more sports updates. You can also download the NDTV Cricket app for Android or iOS.