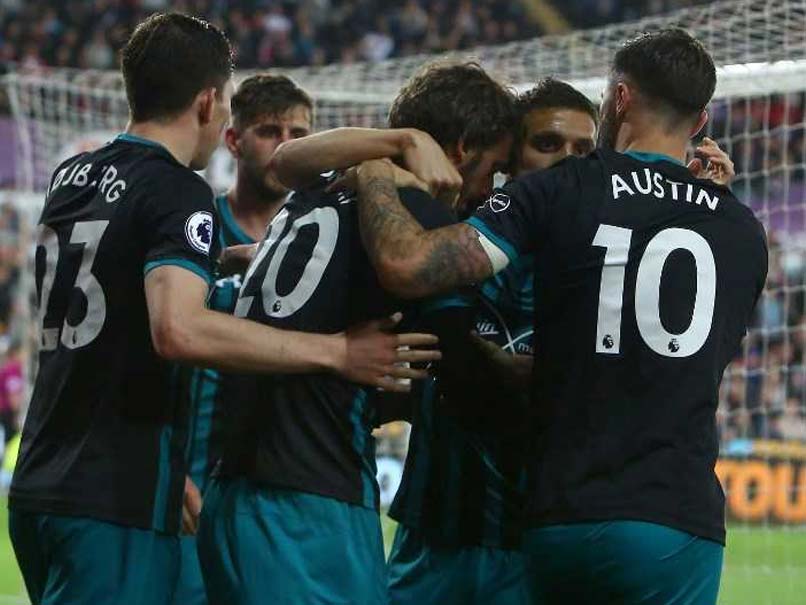 West Brom were relegated from the Premier League on Tuesday after Southampton took a huge step towards keeping their place in the English top flight by beating fellow strugglers Swansea. Darren Moore's West Brom needed a draw between the Saints and Swans in south Wales to take their fight to avoid relegation into the final day of the season on Sunday. After more than 70 minutes of frenetic action, substitute Manolo Gabbiadini provided the decisive moment for Southampton when he reacted quickest to Charlie Austin's parried shot in a crowded goalmouth. Gabbiadini had only been on the pitch for four minutes and it was only his fifth goal of a difficult season for the Italian.

The result means Southampton move up to 16th in the table, three points clear of 18th-place Swansea, who are favourites to joint West Brom and Stoke in the Championship.

Southampton's win confirmed West Brom's return to the English second tier after eight seasons in the top flight, with an eighth-place finish the best the Baggies managed during the 2012/13 season with Steve Clarke in charge.

West Brom's season started well, with six points taken from a possible six after successive 1-0 wins at home to Bournemouth and away to Burnley.

However, after picking up just four points from a possible 30, Tony Pulis was sacked two days after losing 4-0 at home to Chelsea and was replaced by Gary Megson, who temporarily took charge of two games.

Alan Pardew was then named permanent manager but his arrival failed to deliver the improvement needed to guide the side away from relegation.

Pardew, who led the Baggies to an FA Cup fourth-round victory at Liverpool, only had a 2-0 home win against Brighton to show for his efforts in the Premier League.

Problems off the pitch added to the disappointment on it when a mid-season trip to Barcelona made the headlines for the wrong reasons.

Four senior players, including captain Jonny Evans and England midfielder Jake Livermore, were forced to apologise after a taxi was stolen from outside a fast-food restaurant.

On April 2, Pardew's time was up and he was replaced by Moore until the end of the season, becoming West Brom's fourth manager of the campaign.

Since Moore's appointment, West Brom have taken 11 points from a possible 15 to keep alive the hope of a great escape.

Southampton had looked dead and buried when Mark Hughes came in to replace the sacked Mauricio Pellegrino in March.

But seven points from three games have given Saints a huge opportunity to escape the drop on the final day this weekend, even if that match is a home date against the champions Manchester City.

The Saints' goal difference is also nine better than Swansea's, so they will be safe barring a significant turnaround.

Huddersfield also remain in the mix given the poor state of their goal difference, although one point from remaining games against Chelsea and Arsenal will ensure they finish above Swansea.

Comments
Topics mentioned in this article
Southampton Swansea City Manolo Gabbiadini English Premier League Football West Bromwich Albion
Get the latest updates on IPL 2020, check out the IPL Schedule for 2020 and Indian Premier League (IPL) Cricket live score . Like us on Facebook or follow us on Twitter for more sports updates. You can also download the NDTV Cricket app for Android or iOS.