Italy head coach Cesare Prandelli admitted that he had been "pleasantly surprised" by Stephan El Shaarawy and Fiorentina. 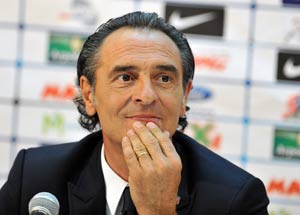 Italy head coach Cesare Prandelli admitted that he had been "pleasantly surprised" by Stephan El Shaarawy and Fiorentina.

Prandelli named his squad to face France in a friendly to be held at the Stadio Tardini in Parma Wednesday, reports Xinhua.

Milan striker and Serie A top scorer El Shaarawy is widely expected to be in the side, as he was not called up for Under-21 duty this week.

"El Shaarawy is a young lad who is surprising everyone," Prandelli was quoted by football-italia.net as saying.

"He has been able to bring quality to football and also done very well in terms of scoring goals.

"Fiorentina are the big surprise of the season so far, as Vincenzo Montella has given them a style of play that is attacking, entertaining and effective.

"I am happy for everyone in Florence," added the former Viola boss.

Comments
Topics mentioned in this article
Football Fiorentina Dimitar Berbatov Francesco Totti Roma Torino Juventus Inter Milan Stephan El Shaarawy Italy
Get the latest Cricket news, check out the India cricket schedule, Cricket live score . Like us on Facebook or follow us on Twitter for more sports updates. You can also download the NDTV Cricket app for Android or iOS.