Pierre-Emerick Aubameyang called joining Barcelona "the opportunity of his life" on Thursday and backed the club to regain its place among Europe's elite. 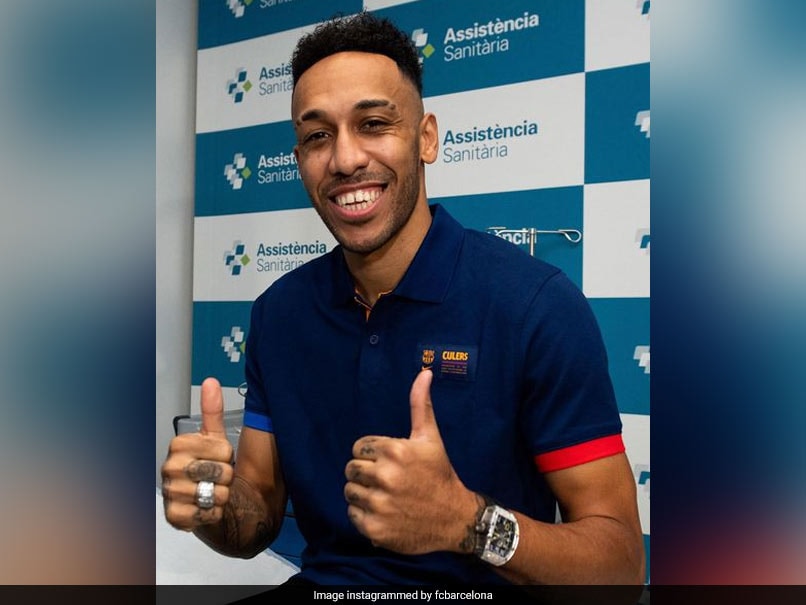 Pierre-Emerick Aubameyang called joining Barcelona "the opportunity of his life" on Thursday and backed the club to regain its place among Europe's elite. Aubameyang was officially presented at Camp Nou after his signing was confirmed on Wednesday, the 32-year-old allowed to move on a free transfer after Arsenal terminated his contract. His deal at Barca runs until 2025 although there is a break clause in June 2023 and a buy-out clause set at 100 million euros. "I have always dreamt of playing in La Liga," Aubameyang said.

"It's an incredible opportunity for me, it's been a dream since I was little and it's the opportunity of my life. Barca is one of the best clubs in the world and I am very happy to be here."

Barcelona will hope Aubameyang can help solve the team's scoring problems this season and make the difference in their fight to finish in La Liga's top four.

Plagued by debts of more than a billion euros and still recovering from the shock departure of Lionel Messi, Barca are no longer the force they were.

They were knocked out of this season's Champions League in the group stage and lie fifth in La Liga, 15 points behind leaders Real Madrid.

"I know that we will return to the top, little by little," Aubameyang said.

Aubameyang could make his debut at Camp Nou on Sunday in a crunch La Liga game against Atletico Madrid, who sit a point ahead of Barcelona in fourth.

But the striker is likely to be lacking sharpness. His last appearance for Arsenal came against Everton on December 6.

"I haven't played a game in a long time, but in my head it is very clear that I am ready to play and to help," said Aubameyang.

"I've talked a bit with the boss and he sees me as a number nine but if he ever needs me to play on the wing, I'm ready to play there too."

Aubameyang scored 92 goals in 165 games for Arsenal but fell out with coach Mikel Arteta after a series of disciplinary issues.

"I don't think I did anything wrong," Aubameyang said. "I think (the problem) was just with him. He wasn't happy. I was calm and that's it."

Barcelona Pierre-Emerick Aubameyang Football
Get the latest updates on ICC T20 Worldcup 2022 and CWG 2022 check out the Schedule, Live Score and Medals Tally. Like us on Facebook or follow us on Twitter for more sports updates. You can also download the NDTV Cricket app for Android or iOS.