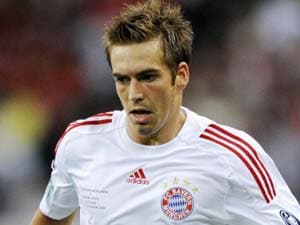 Bayern Munich captain Philip Lahm will be out of action for two matches owing to an injury, the Bavarians said in an official statement Thursday.

Lahm pulled a hamstring in his right thigh during the UEFA Champions League encounter against CSKA Moskva on Wednesday. The German international will miss the Bundesliga match against Braunschweig and next week's German Cup fixture against Augsburg, Xinhua reported.

Bayern Munich sit currently atop the Bundesliga standings with a four-point lead, followed by Bayer Leverkusen and Dortmund.

Comments
Topics mentioned in this article
Football Shinji Okazaki Philipp Lahm Germany Borussia Dortmund Bayern Munchen
Get the latest updates on ICC T20 Worldcup 2022 and CWG 2022 check out the Schedule, Live Score and Medals Tally. Like us on Facebook or follow us on Twitter for more sports updates. You can also download the NDTV Cricket app for Android or iOS.