Barcelona daily Sport said Guardiola was drawn to Munich by Bayern's sporting qualities and a squad of top players such as Philipp Lahm, Franck Ribery and Spaniard Javi Martinez, a former Barca target. 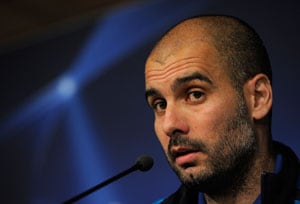 "Kaiser Guardiola" in top pro-Real Madrid sports daily Marca and "Herr Pep to Bayern" in Mundo Deportivo were among the German puns in headlines prompted by the surprise move.

"Bayern shake up world football with the signing of Guardiola," wrote Marca in its lead story on the Real's former Spanish league nemesis.

"See you in the Champions League," it added, referring to likely clashes to come in Europe's elite club competition, from which Bayern knocked Real out last year.

Barcelona daily Sport said Guardiola was drawn to Munich by Bayern's sporting qualities and a squad of top players such as Philipp Lahm, Franck Ribery and Spaniard Javi Martinez, a former Barca target.

"Despite his desire to coach in the (English) Premier League, the millions offered by Manchester City and Chelsea did not convince him," Sport wrote.

"Barcelona's former coach loves the structure of the team" in Munich, it added.

The other big Barcelona sports daily Mundo Deportivo hailed the "talent, discipline and track record" of the young Bayern team which it says "has all the essential ingredients in Pep's footballing recipe".

Like Sport, however, it gave more space in its pages to dissecting Barca's disappointing 2-2 draw against Malaga in the Spanish cup on Wednesday evening.

General daily El Pais said Guardiola "chose Bayern because of the good economic health of German football, the chance to give the team a new style of play and family stability over offers of millions from England and Italy".