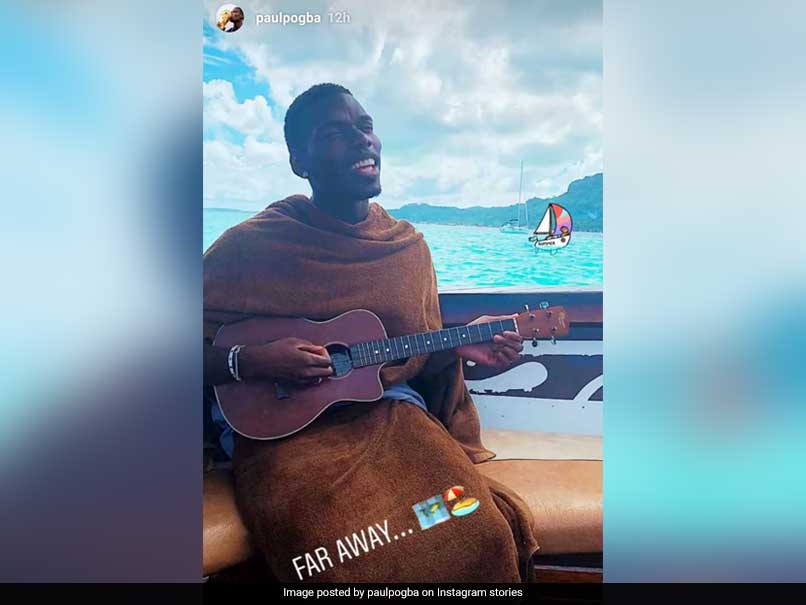 Paul Pogba posted a picture on Instagram stories of him playing the ukulele on a boat.© Instagram

While Manchester United prepare themselves for the start of the new Premier League season, key midfielder Paul Pogba is still enjoying some downtime following his FIFA World Cup-winning exploits with the French team in Russia. Pogba shared a picture and video of himself relaxing "far away" from the hectic life of his Manchester United teammates. In the video, the French star can be seen performing the haka with one of the locals with the caption 'Blending in' added alongside the video. The 25-year-old also posted a picture on Instagram stories of him playing the ukulele on a boat.

France overcame a determined Croatia to win 4-2 in the World Cup 2018 final in Russia. Pogba was instrumental in France's triumph in Russia, particularly in the final, when he netted the third goal for Didier Deschamps' side against Croatia.

Pogba was the subject of criticism from some quarters for his Manchester United performances last season and found himself relegated to the bench at times during the second half of the campaign.

Pogba has shared a frosty relationship with United boss Jose Mourinho and the Portuguese's comments about the midfielder following France's World Cup win would have done little to ease that tension.

When asked what he and United needed to do to get the best out of Pogba in the Premier League, Mourinho took the opportunity to flip the question around, pointing out that it is up to the player to ask what he can do to produce his best for his club.

"I don't think it's about us getting the best out of him," Mourinho had said. "It's about him giving the best he has to give. I think the World Cup is the perfect habitat for a player like him to give the best. Why? Because it's closed for a month, where he can only think about football."

Mourinho's tetchy mood threatened to derail Manchester United's pre-season US tour. The Portuguese boss took aim at the club's transfer window inactivity after watching his team crash to a 1-4 defeat to Liverpool.

Paul Pogba English Premier League Football
Get the latest updates on T20 World Cup, check out the T20 World Cup Schedule and Live Score . Like us on Facebook or follow us on Twitter for more sports updates. You can also download the NDTV Cricket app for Android or iOS.