Paolo Rossi, a hero of Italian football who inspired the national side to victory in the 1982 World Cup, has died aged 64, Italian media reported on Thursday. 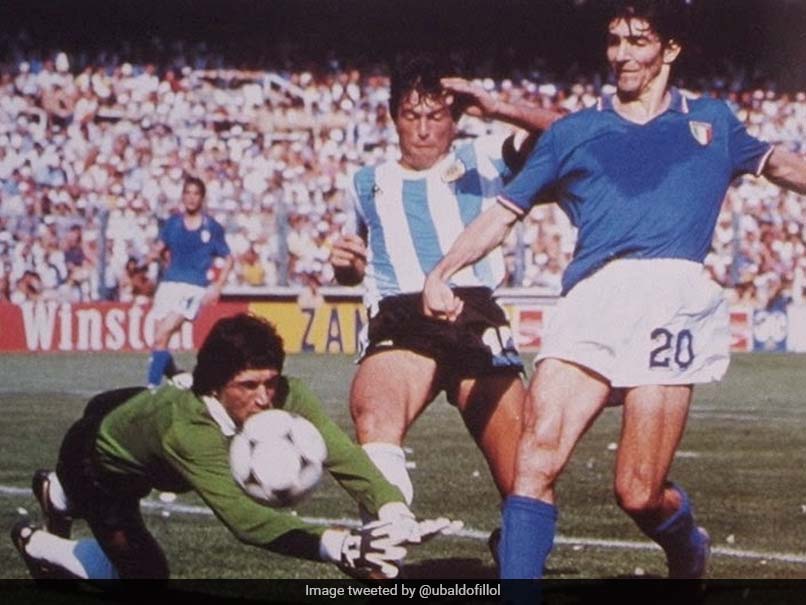 Paolo Rossi, who fired Italy to victory in the 1982 World Cup after almost missing the tournament through a match-fixing scandal, has died aged 64, prompting an outpouring of grief and tributes. Rossi's wife Federica Cappelletti announced the death in an Instagram post featuring a photo of the couple, accompanied by the comment "Forever," followed by a heart. "There will never be anyone like you, unique, special, after you the absolute nothing...," she added on Facebook. The cause of Rossi's death was not revealed but Italian media reported he had been suffering from "an uncurable disease".

Tributes flooded in for 'Pablito', who was banned for three years for his part in the betting scandal, but returned to win the World Cup in Spain and the Ballon D'Or the same year.

Rossi scored 20 goals in 48 appearances for Italy, and more than 100 Serie A goals with Italian clubs including Juventus, Milan and Verona. In the 1982 World Cup he was top scorer with six goals.

Goalkeeper Dino Zoff, who captained the 1982 winning side, described Rossi as an "extraordinary footballer, excellent teammate and friend".

He said Rossi's ban -- later reduced to two years -- did not bother him, as "we knew who Paolo Rossi was, what a serious person he was and what an extraordinary footballer we had with us".

"He was irreplaceable in that group. And the relationship with him was great. We were a team of friends, a great group," Zoff said.

Juventus said on the club's website: "'Pablito' has passed away: for the entire nation, he was the man of an unforgettable Mundial, and for us, he was so much more."

Prime Minister Giuseppe Conte paid tribute to an "unforgettable champion", saying that his goals that summer "gave a dream to an entire generation".

- Bribery scandal -
Rossi won the hearts of Italian fans when his goals propelled Enzo Bearzot's Azzurri -- who started the tournament with three uninspiring draws -- to a third world title.

But he almost missed the whole tournament.

In 1980, he was caught up in match-fixing scandal known as "Totonero" -- a play on the Italian for football pools -- that also led to top teams including AC Milan and Lazio being relegated.

Rossi was banned for three years, missing out on the 1980 European Championship on home soil, where Italy finished fourth.

After protesting his innocence he was cleared to play after two years and was rehired by Juventus, going on to earn his spot in the World Cup squad.

A slight winger who converted to centre-forward, Rossi had an uncanny ability to be in the right place at the right time.

He exploded onto the stage of the 1982 tournament with a hat-trick in the 3-2 defeat of Brazil.

In the semi-finals he scored both goals as Italy beat Poland 2-0, and he hit the opening goal in the 3-1 win over West Germany in the final.

Rossi finished top scorer in the tournament with six goals.

He was also a member of the Italy side that finished fourth in Argentina in 1978.

Along with Christian Vieri and Roberto Baggio, he holds the Italian record for nine goals scored in the World Cup.

He scored 20 goals in 48 appearances for Italy and was voted European Footballer of the Year in 1982.

Born in Prato in Tuscany, Rossi made his professional debut at Juventus in 1973, but his initial two-year spell at the Turin club was blighted by knee injuries.

His first club successes were with Vicenza, and helped the club into the top flight. However, following relegation he left for a loan spell at Perugia, where scandal struck.

After his suspension Rossi returned to Juventus, and the 1983-1984 season was his most successful at club level.

He formed a formidable trio with Michel Platini and Zbigniew Boniek and accumulated trophies -- two Serie A titles, the Italian Cup, Cup of Cups, and European Supercup.

In 1985, Juventus won the European Cup amid the tragedy of the Heysel Stadium final against Liverpool, where 39 fans were killed. It was to be Rossi's last match with the 'Bianconeri'.

He went to rivals AC Milan for an unsuccessful season which was overshadowed by injury, as was his final season at Hellas Verona.

After his career as a footballer, Rossi worked as a TV pundit.

Rossi is survived by his wife and three children.

Italy Football
Get the latest updates on ICC T20 Worldcup 2022, check out the Schedule and Live Score. Like us on Facebook or follow us on Twitter for more sports updates. You can also download the NDTV Cricket app for Android or iOS.