Olivier Giroud and Theo Walcott scored a brace each to help Arsenal F.C. register an easy 4-0 win over Hull City in the FA Cup. 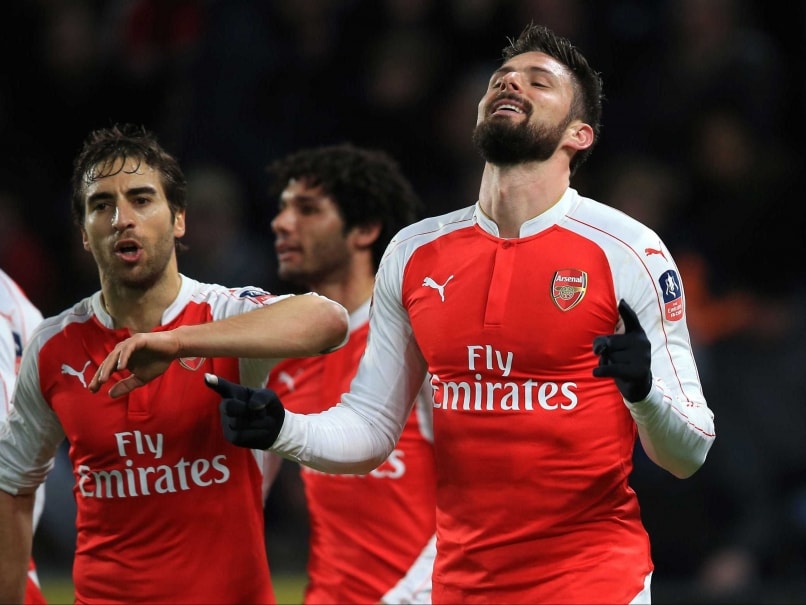 Two goals each from Olivier Giroud and Theo Walcott saw holders Arsenal stretch their three-year unbeaten run in the FA Cup thanks to a comfortable 4-0 win at Hull City on Tuesday. (Click here for latest Football stories)

Arsene Wenger's side will host Premier League rivals Watford in the last eight on Sunday to contest a place in the semi-finals at Wembley in April after victory in a 15th consecutive tie for the Gunners as they close in on a third straight success in the competition.

Giroud opened the scoring before the break and added another in the 71st minute before Walcott netted twice in the final 13 minutes, but Arsenal progressed at a cost, losing centre-backs Per Mertesacker and Gabriel in addition to Welsh midfielder Aaron Ramsey to injury in sealing only a second away win since mid-December.

However, a first win in six games saw Arsenal avoid their longest run without victory for 18 years as they continue to enjoy life in a cup where they last tasted defeat in February 2013 against Blackburn Rovers.

As Arsenal fans unfurled a large banner proclaiming 'Thanks for the memories Arsene, time to go' before kick-off, a visiting side showing six changes started brightly and had the ball in the net early on only for Walcott's crisply-taken volley from inside the area to be correctly ruled out for offside.

Joel Campbell should have done better when curling a shot from 15 yards wide as Hull were caught by a swift Walcott-inspired counter-attack, but it was the hosts who came close to breaking the deadlock when a stunning save low to his right from Arsenal 'keeper David Ospina diverted a deflected 20-yard effort from David Meyler that appeared destined for the bottom corner.

Wenger's side took the lead five minutes before the interval with the first goal second-tier Hull have conceded at home for 652 minutes.

Giroud scored for the first time since bagging two in the 3-3 draw with Liverpool in mid-January as he put the ball through the legs of Eldin Jakupovic from close range after Meyler failed to see the danger when attempting to pass the ball back to his 'keeper.

Kieran Gibbs was unfortunate not to add to the lead before the break, the defender seeing a 25-yard effort strike the bar after finding space following a short corner.

Gabriel limped off early in the second half, joining Mertesacker on the Gunners' injury list after the German international had been forced off looking groggy before the interval.

He needed stitches in a head wound following an accidental clash with Hull forward Nick Powell, substitute Nacho Monreal coming on as an emergency centre-back.

Gabriel's replacement Aaron Ramsey came within inches of inadvertently heading a cross into his own net as Championship promotion contenders Hull enjoyed their most sustained spell of pressure midway through the second half thanks to the introduction of substitute Sone Aluko.

Giroud's 20th goal of the campaign -- a volley from a deflected Walcott cross -- put the result beyond doubt before Ramsey was withdrawn as he appeared to indicate to Wenger that he was feeling a calf problem.

Walcott then added a third with 13 minutes remaining as the forward calmly passed the ball into the bottom corner from 10 yards after Campbell's sublime through-ball found him in space in the area.

And Walcott added the fourth with two minutes left with the aid of a deflection off defender Alex Bruce as he sprinted onto an Alex Iwobi pass to fire in an angled drive.

Comments
Topics mentioned in this article
Olivier Giroud Theo Walcott Arsenal Football
Get the latest updates on ICC T20 Worldcup 2022 and CWG 2022 check out the Schedule, Live Score and Medals Tally. Like us on Facebook or follow us on Twitter for more sports updates. You can also download the NDTV Cricket app for Android or iOS.