Euro Qualifiers: Spain will need to beat Sweden in Solna on Tuesday to be sure of qualification with two games to spare. 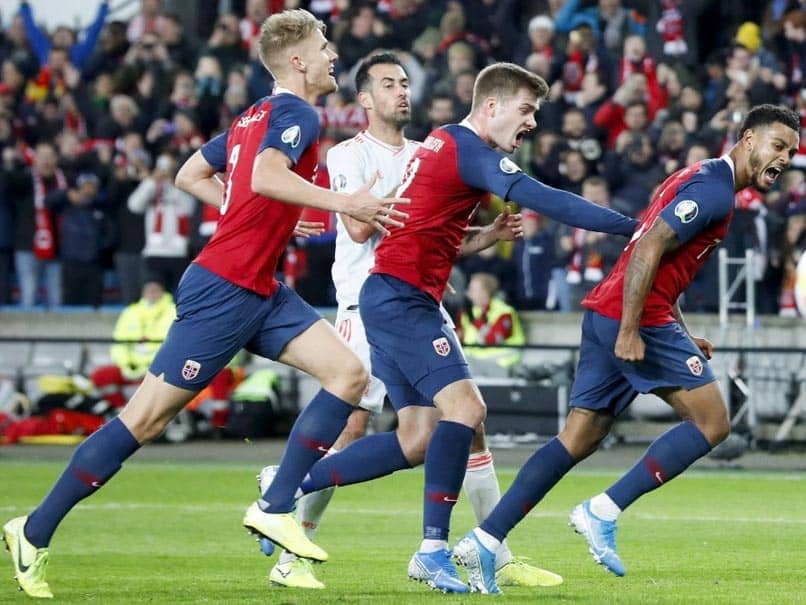 Joshua King's 94th-minute penalty snatched Norway a 1-1 draw with Spain in Oslo on Saturday as the three-time champions were made to wait to qualify for Euro 2020. Victory would have booked Robert Moreno's Spain a spot at next year's finals, to be played at 12 venues across Europe, if Romania had failed to beat the Faroe Islands or Malta had beaten Sweden. But Romania saw off the Faroes 3-0 and Sweden thrashed Malta 4-0, while King's dramatic equaliser means Spain will need to beat the Swedes in Solna on Tuesday to be sure of qualification with two games to spare.

They lead Sweden by five points in Group F with three matches remaining, while Romania are only one point further back.

Norway are still right in contention to finish in the top two and qualify after extending their unbeaten run to six qualifiers, sitting four points behind Sweden ahead of matches against Romania, the Faroes and Malta.

"It's a real pain to lose points in the final seconds. It's complicated to play against a team who knew that if they lost they were pretty much out," said Spain captain Sergio Ramos, who broke Iker Casillas' national appearance record with his 168th cap.

"We viewed this as an important match to win so as to qualify tonight but we approach the remaining games with calm and confidence."

It was Spain's first draw in a European Championship qualifier since a 1-1 stalemate at Iceland in September 2007, and ended their 100 percent record in the group.

But Norway, without injured teenage striker Erling Braut Haaland, grew into the contest and saw a penalty appeal turned down when Ramos tangled with King, before the Bournemouth forward headed Omar Elabdellaoui's 'rabona' cross too close to Kepa Arrizabalaga.

The hosts were the better side for much of the first half, but Elabdellaoui wasted another opportunity when he dallied on the ball inside the Spain box before shooting straight at Kepa.

Celtic centre-back Kristoffer Ajer also went close on the stroke of half-time, but headed wide when unmarked from a corner.

But Spain snatched a 47th-minute lead as Norway failed to clear their lines, and Saul Niguez latched onto Sergio Busquet's knockdown to unleash a dipping strike from just outside the area which bounced through the hands of Jarstein.

The Scandinavians came close to a leveller within seconds, but King's looping header dropped agonisingly wide.

Lars Lagerback's Norway, hoping to qualify for a first major tournament since Euro 2000, continued to pile forwards and Ole Selnaes was denied an equaliser by Saul's brilliant block, before King blazed over.

Ruiz struck the woodwork for a second time with a low effort which bounced off the base of the post, and Norway made him pay.

Elabdellaoui was flattened by the onrushing Kepa, and King, just as he did in Norway's 2-1 opening-game loss in Spain, slotted home the penalty.

Sergio Ramos Joshua King Football
Get the latest updates on IPL 2021, IPL Points Table , IPL Schedule 2021 , live score . Like us on Facebook or follow us on Twitter for more sports updates. You can also download the NDTV Cricket app for Android or iOS.