Nicolas Anelka eased the pressure on Carlo Ancelotti as his double-strike inspired Chelsea's 2-0 win over FC Copenhagen in the first leg of their Champions League last 16 tie at the Parken Stadium on Tuesday. 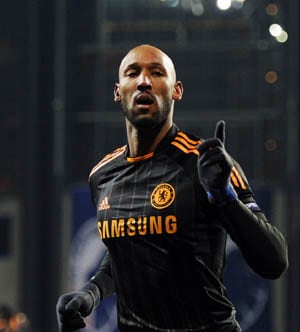 Nicolas Anelka eased the pressure on Carlo Ancelotti as his double-strike inspired Chelsea's 2-0 win over FC Copenhagen in the first leg of their Champions League last 16 tie at the Parken Stadium on Tuesday.

Anelka's 15th and 16th goals of the season put Chelsea on course for the quarter-finals and they should have no trouble finishing off the lacklustre Danish champions in the return at Stamford Bridge next month.

It was a crucial victory for Ancelotti as the Chelsea manager fights to save his job following a woeful run of results which left the Blues in turmoil.

Chelsea's first win in four matches was a positive sign for Ancelotti but the Italian will be well aware that much sterner tests lie in wait as the west Londoners seek to reach the Champions League final at Wembley in May.

After Saturday's FA Cup exit against Everton, Ancelotti unsurprisingly tinkered with his starting line-up and he made four changes, the most notable being Fernando Torres's return in place of Didier Drogba.

Ancelotti opted for a 4-4-2 system with Torres partnered by Anelka instead of the out-of-form Drogba.

With Chelsea's Premier League title challenge all but over, any hope of winning a domestic trophy vanished with that penalty shoot-out defeat to Everton, leaving the Champions League as Ancelotti's main focus.

Ancelotti this week admitted John Terry, Branislav Ivanovic and Frank Lampard are the only Blues in good form at present, but the Italian remains adamant Chelsea's season is far from dead yet.

His positive attitude seemed to have the desired effect as Chelsea took control from the start.

They would have been ahead in the early moments if Torres had shown a better first touch when a miscued shot fell to him.

The Spanish striker's lack of confidence has been clear for all to see since his British record transfer from Liverpool and his woeful control gave Johan Wiland time to come off his line and block the shot.

Fortunately for Ancelotti, Anelka was in far more predatory mood and the France striker opened the scoring in the 17th minute.

It helped that Copenhagen, playing their first competitive fixture since December 7 because of their league's winter break, looked rather ring-rusty in the sub-zero temperatures.

A misplaced pass from former Chelsea winger Jesper Gronkjaer presented the ball to Anelka and he advanced unchallenged before driving in a low shot from the edge of the area that whistled past Wiland.

Torres had another sight of goal as he twisted past two Copenhagen defenders but his shot from a tight angle was pushed out by Wiland.

Copenhagen were struggling to stem the tide and Anelka should have done better than shoot straight at Wiland before Torres misfired again when his tame effort failed to trouble the Danish goalkeeper.

Martin Vingaard came on for Copenhagen at half-time and the substitute almost made an immediate impact with a long-range effort that forced a scrambling save from Petr Cech.

Lampard's pass was perfectly-weighted for Anelka and he lashed a first-time shot past Wiland into the far corner.

There was no questioning Chelsea's superiority and it took a fine save from Wiland to deny Torres as the striker made room for a low strike.

Torres couldn't break his scoring drought but for Ancelotti that was only a minor concern as Chelsea finally got back on track.

Comments
Topics mentioned in this article
Football Chelsea Brede Hangeland FC Copenhagen Juventus Fulham Nicolas Anelka
Get the latest updates on India vs Australia Series, check out the India vs Australia Schedule for 2020-21 and Ind vs Aus live score . Like us on Facebook or follow us on Twitter for more sports updates. You can also download the NDTV Cricket app for Android or iOS.