Neymar would be out for 10 weeks with a metatarsal injury. 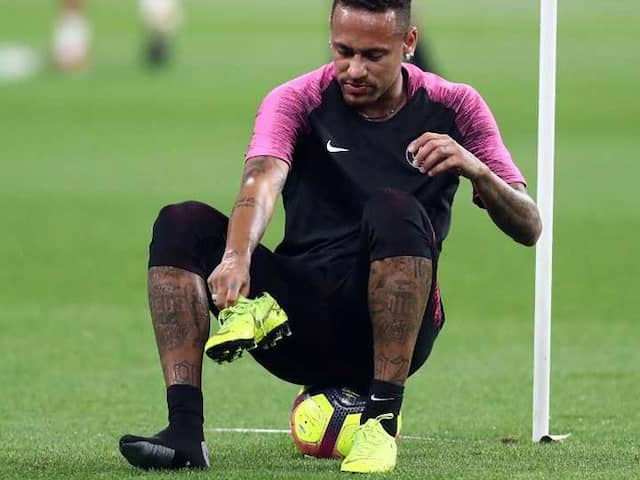 However, Neymar will not undergo an operation.© AFP

Neymar will miss both legs of Paris Saint-Germain's upcoming Champions League last-16 tie against Manchester United after the French club confirmed on Wednesday that the world's most expensive player would be out for 10 weeks with a metatarsal injury. However, Neymar will not undergo an operation, with PSG saying the Brazilian had instead agreed on "a conservative treatment" that could see him return in time for the Champions League quarter-finals in April should they qualify.

"After detailed analysis by specialists, a consensus was reached of a conservative treatment of Neymar's injury to the fifth right metatarsal," the French champions said. "Informed of this recommendation, Paris Saint-Germain's Brazilian international striker agreed with this protocol. As a result, Neymar is expected to return to the field within 10 weeks."

Neymar suffered the injury in PSG's 2-0 French Cup win against Strasbourg last week, and his coach Thomas Tuchel had already all but ruled the 222 million-euro ($264m) forward out of the first leg against United at Old Trafford on February 12. The second leg of that tie is scheduled for March 6, and the timeline announced by the club means he could just make it back in time for a quarter-final first leg, due to be played on April 9 and 10. The second legs are set for the following week.

"Paris Saint-Germain sends its strongest support and encouragement to Neymar Jr. to overcome this injury, with the courage and determination that the player has always shown," the club added.

While Neymar will now sit out a crucial period in PSG's season, there has also been concern back in Brazil, which will host the Copa America in June and July. An operation would have put Neymar's participation in that tournament at risk, as well as effectively ending his club season.

Brazil coach Tite and national team doctor Rodrigo Lasmar have been in Paris this week to visit Neymar, who suffered a fracture to the same right foot at the end of February last year.

He underwent an operation, performed by Lasmar, and returned just in time for the World Cup in Russia last June.

Then, the injury ruled him out of the second leg of their Champions League last-16 tie against Real Madrid, hampering PSG's hopes of overturning a first-leg deficit.

They went on to lose that tie 5-2 on aggregate to the eventual winners.

Neymar's new injury is a major boost to United, who are unbeaten since Ole Gunnar Solskjaer replaced the sacked Jose Mourinho in the dugout.

It is also a blow to PSG's ambitions of going all the way in Europe after years of disappointment in the Champions League since the Qatari takeover of the club in 2011.

Neymar has scored 20 goals this season in 23 appearances, including five in the Champions League group stage.

There will now be a greater dependence on Kylian Mbappe and Edinson Cavani in attack, and Neymar's injury comes just as the Ligue 1 leaders are also sweating on the fitness of key midfielder Marco Verratti, who has an ankle injury.

Fellow midfielder Adrien Rabiot has been frozen out over his refusal to sign a new contract, but PSG yesterday completed the signing of Argentine international midfielder Leandro Paredes from Zenit Saint Petersburg.

Paredes signed on a four-and-a-half-year deal for a reported fee of 47 million euros ($54 million), and the club are also keen on the Everton midfielder Idrissa Gueye.

Manchester United Neymar Football
Get the latest Cricket news, check out the India cricket schedule, Cricket live score . Like us on Facebook or follow us on Twitter for more sports updates. You can also download the NDTV Cricket app for Android or iOS.