England beat Belgium 2-1 on Sunday to move to the top of their group in the Nations League. 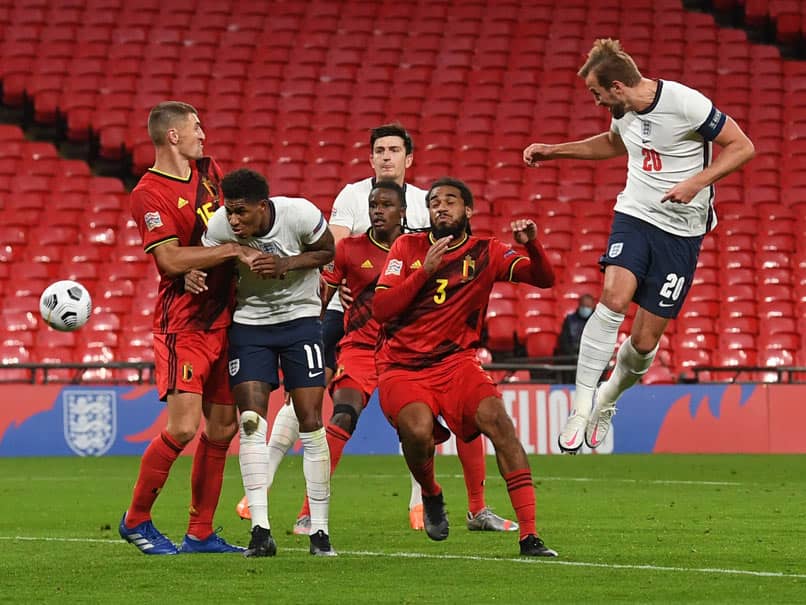 England and Belgium clashed in a Nations League game on Sunday.© AFP

Gareth Southgate believes England gave a glimpse of what they can achieve by beating Belgium 2-1 to move top of their Nations League group. The visitors arrived in London as the number one ranked side in the world following 12 consecutive wins in competitive games. After Romelu Lukaku's early penalty put Belgium in front, England bounced back through Marcus Rashford's spot-kick and Mason Mount's deflected winner 25 minutes from time. The Three Lions move one point ahead of Belgium at the top of League A, Group 2 with three more games, including another meeting between the sides in Brussels next month to come.

England will host the majority of their games at next year's rescheduled European Championships with Belgium one of the major threats to their chances of winning the competition for the first time.

"We are not going to face a more difficult game defensively," said Southgate. "It was a brilliant test, the sort of test we need. That is the beauty of the Nations League, you get games against this level of opponent.

"It's a great experience for them and to go and win it should give them a sense of what might be possible in the next few years."

Southgate was without several players from his strongest side with captain Harry Kane only fit enough to feature as a second-half substitute, Raheem Sterling injured and Ben Chilwell ill.

Those absences took their toll early on as England were fortunate to weather a Belgian storm.

Belgium were left bemoaning the lack of VAR when Yannick Carrasco had a goal ruled out for a marginal offside call against Timothy Castagne.

"It would have been a very different game if VAR had been available," said Belgium boss Roberto Martinez. "Our goal disallowed, I feel he is onside. VAR has taken refereeing to a different level and when there is no VAR it's difficult for the referees."

Martinez's side took a deserved lead on 16 minutes when Lukaku's pace drew Eric Dier into a naive challenge and German referee Tobias Stieler eventually pointed to the spot after a delay. Lukaku fired home his 53rd international goal from the spot.

But Belgium failed to build on their lead and conceded a soft penalty themselves when Thomas Meunier pulled down Jordan Henderson from a corner.

Rashford was awarded a MBE for his work in the fight against child poverty on Friday and the Manchester United forward took responsibility from the spot in Kane's absence to cap a special weekend.

Carrasco should have restored Belgium's lead before half-time when he skewed wide with just Jordan Pickford to beat.

Instead, it was England who got the vital third goal when Mount's shot looped high off Toby Alderweireld and dropped into the far corner.

Belgium still had the chances as Carrasco failed to capitalise on a great through ball by De Bruyne, seconds before the midfielder was replaced with minor injury that will be a worry for his club side Manchester City.

"It's too early to say, he said he wasn't feeling right," said Martinez. "It's not a soft tissue injury, it's just a precaution, but he wasn't 100 percent."

At the other end, Rashford should have sealed a big win for Southgate's men when he fired over at the end of a fine counter-attack involving two one-twos with Declan Rice.

But England held out for a morale-boosting win, with Henderson also hoping victory could be  a springboard into Euro 2020.

"We want to compete with the very best teams, and Belgium are certainly that," said the Liverpool captain. "We competed very well and that's what we want to do, keep competing and growing and you never know where that may take us."

Belgium Football
Get the latest updates on IPL 2020, check out the IPL Schedule for 2020 and Indian Premier League (IPL) Cricket live score . Like us on Facebook or follow us on Twitter for more sports updates. You can also download the NDTV Cricket app for Android or iOS.