Jose Mourinho has enjoyed a love affair with the Champions League and the Portuguese coach hopes he can be the man to end Real Madrid's Champions League last 16 curse as Real host Lyon at the Santiago Bernabeu on Wednesday for the second leg of the knockout tie. 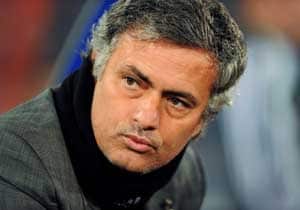 Jose Mourinho has enjoyed a love affair with the Champions League and the Portuguese coach hopes he can be the man to end Real Madrid's Champions League last 16 curse as Real host Lyon at the Santiago Bernabeu on Wednesday for the second leg of the knockout tie.

Nine-time European champions Real have crashed out of the competition at the last 16 stage for six successive seasons and Mourinho, who has won the competition with Porto and Inter Milan, has been brought in to make sure this doesn't happen again and help deliver a 10th European crown.

"My team are not afraid of recent history; statistics exist so that we can go out and contradict them," said Mourinho.

"Real are the biggest team in the world but is sleeping. It is like an elephant that is sleeping, its power is when it is alive.

"We have to be at our best because Lyon are a very good team with Champions League experience that could help them."

Lyon eliminated Real 2-1 on aggregate at this stage last season so Madrid will be out for revenge and have the upper hand after a 1-1 first leg draw in France.

Real are unbeaten in this season's Champions League and have won all of their 15 home matches in the league and Europe, which makes ominous reading for Lyon.

The Spanish giants, five points behind Barcelona in the league, are also expected to welcome back top-scorer Cristiano Ronaldo who has missed the last two league matches with a thigh injury.

In Ronaldo's absence, French international forward Karim Benzema has come to the fore, scoring two goals in each of his last three league matches and the 23-year-old hopes to shoot down hometown club Lyon.

Benzema was born in Lyon and won four league titles with his local club before they sold him to Real for 35 million euros in July 2009.

The Frenchman has found life difficult in Madrid but injuries gave him a chance to shine and he has grabbed it with both hands.

"I feel great and I am lucky because I am scoring two goals a game thanks to my team-mates," said Benzema. "We are 90 minutes away from reaching the quarter-finals of the Champions League and I hope that we can get through.

"Lyon know they have to attack to score a goal as the first leg result favours us, but they won't give us much space and they are a solid unit."

The form of Benzema is likely to see Togo striker Emmanuel Adebayor, on loan from Manchester City, demoted to the substitutes bench unless Ronaldo is not deemed match fit.

Lyon have never lost at the Bernabeu, drawing on each of their three Champions League visits, but know that may not be enough this time around with Madrid able to progress with a 0-0 draw.

"I am sure (Jose) Mourinho will play for a 0-0," said Lyon president Jean-Michel Aulas.

Lyon, third in their domestic league, welcome back key Argentine striker Lisandro Lopez after a hamstring problem ruled him out of the first leg, but veteran Brazilian defender Cris, 33, has a thigh injury that makes him a doubt for the trip to the Bernabeu.

"A fortnight of rest was enough for Lisandro (Lopez)," said Lyon coach Claude Puel. "He has trained well this week and will be in the squad.

"The tie is not over yet. We know we will have opportunities in the second leg - we'll have to convert them."

Comments
Topics mentioned in this article
Football John Terry Real Madrid
Get the latest updates on ICC T20 Worldcup 2022 and CWG 2022 check out the Schedule, Live Score and Medals Tally. Like us on Facebook or follow us on Twitter for more sports updates. You can also download the NDTV Cricket app for Android or iOS.