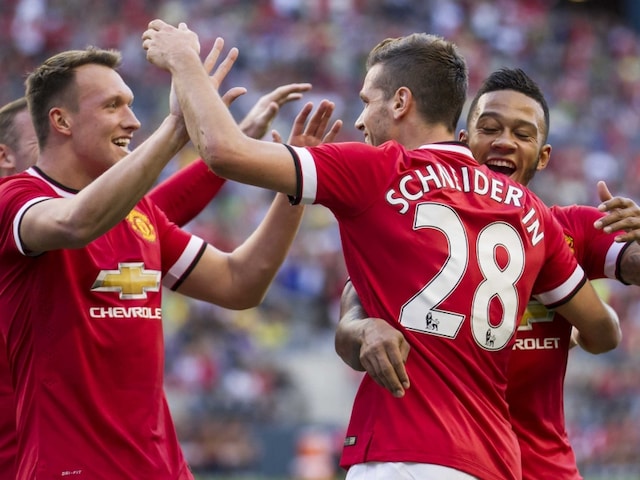 French international Schneiderlin, who sealed a reported $39 million move to Old Trafford from Southampton earlier this month, steered home a fifth-minute header to secure the win at Seattle's CenturyLink field.

Italian international Matteo Darmian slotted in at right back while Dutch attacker Memphis Depay was deployed in the centre of an attacking trio flanked by Ashley Young and Juan Mata.

Captain Wayne Rooney spearheaded the attack at the tip of a balanced looking United side that was rarely troubled by their Mexican opponents.

United's opener came after only five minutes when Schneiderlin leapt at the far post to meet Mata's cross with a looping header which sailed over the head of America goalkeeper Hugo Gonzalez for 1-0.

United dominated for the remainder of the half, with Mata going close to doubling the lead shortly after the United opener only to see his shot from Young's cutback saved.

United were lucky to survive strong claims for a penalty midway through the half however when Daley Blind, playing in central defence alongside Phil Jones, brought down Miguel Samudio for what looked like a cast iron spot-kick.

United continued to create the better openings, and Depay spurned a golden opportunity on 37 minutes, electing to shoot on the edge of the area instead of passing to an unmarked Young.

Van Gaal rang the changes at half-time, fielding an entirely new XI for the second half and handing a debut to Bastian Schweinsteiger.

Brazilian youngster Andreas Pereira delivered an eye-catching cameo, almost doubling the lead with an angled shot that went just wide and providing a teasing cross for Adnan Januzaj that the Belgian international narrowly failed to convert.

United now move onto California where they will play San Jose Earthquakes on Tuesday before facing Barcelona on July 25.

They finish their International Champions Cup campaign against Paris Saint-Germain in Chicago on July 29.

Comments
Topics mentioned in this article
Manchester United Morgan Schneiderlin Football
Get the latest Cricket news, check out the India cricket schedule, Cricket live score . Like us on Facebook or follow us on Twitter for more sports updates. You can also download the NDTV Cricket app for Android or iOS.