Joao Moutinho broke the deadlock in the 61st minute from former Leverkusen striker Dimitar Berbatov's assist as the Bundesliga leaders were made to pay for their profligacy. 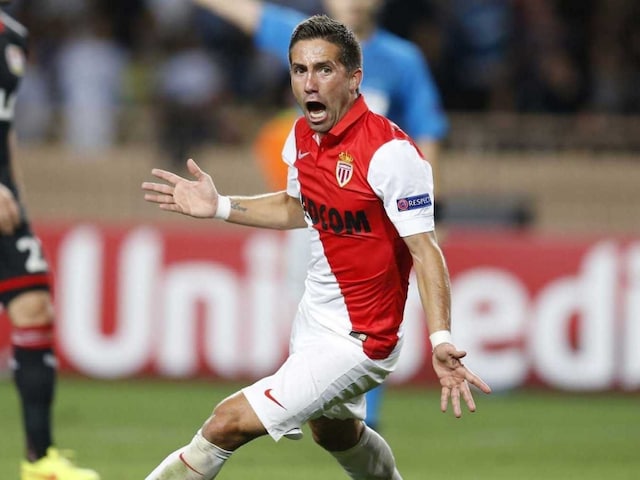 Moutinho broke the deadlock in the 61st minute from former Leverkusen striker Dimitar Berbatov's assist as the Bundesliga leaders were made to pay for their profligacy.

Roger Schmidt's side was in complete control and created the best chances but Monaco's defense remained resolute, before Moutinho ended the visitors' unbeaten run in all competitions this season with his first shot on target.

The win gave some respite to Monaco, which lost Radamel Falcao, James Rodriguez over the summer, and has also endured a miserable start in the French league.

Monaco coach Leonardo Jardim did not change his tactics, with Andrea Raggi and Ricardo Carvalho picked as the centre-back pair and Dimitar Berbatov playing in front of Lucas Ocampos and winger Yannick Ferreira-Carrasco.

Playing in front of a sparse attendance, Monaco created an opening immediately as Ferreira-Carrasco went down in the area after a challenge from Sebastian Boenisch, but referee Pavel Kralovec did not stop play.

Jardim's side spent the opening minutes camped in Leverkusen's half but its enthusiasm quickly faded. A heavy touch from Joao Moutinho gave the visitors the chance to show their pace on the break only for Gonzalo Castro to fire his shot wide in the 13th.

Two minutes later, playmaker Hakan Calhanoglu dummied three defenders but his low-shot from a tight angle ended in the side-netting.

Applying a strong pressing, Leverkusen gradually took the initiative though Stefan Kiessling could not connect with Karim Bellarabi's powerful cross in the box in the 28th.

Bellarabi, who scored the Bundesliga's quickest ever goal after nine seconds earlier this season, missed a golden opportunity to put his team ahead in the 36th as he completely fluffed his shot from Calhanoglu's superb through ball.

Monaco crumbled towards the end of the first half but Leverkusen failed to build on the momentum, with Son Henh-Min missing the target from close range in the 44th and Castro's attempt blocked by a defender's back.

The German side carried its dominance into the second half but was finally punished for their inability to score as Moutinho netted shortly after the hour mark following striker Berbatov's assist.

Following a quick move ignited by Layvin Kurzawa down the left side, Berbatov headed the ball into the Portuguese midfielder's path, and Moutinho slotted past goalkeeper Bernd Leno albeit courtesy of a deflection.

The goal gave the hosts a boost and dashed the visitors' energy as Calhanoglu's final effort at goal in the 80th minute lacked the conviction to beat Monaco keeper Danijel Subasic.

In the group's other game, Hulk and Axel Witsel scored first-half goals to give Zenit St. Petersburg a 2-0 win against 10-man Benfica, with the Portuguese side losing its goalkeeper in the 18th.

Comments
Topics mentioned in this article
Monaco Bayer Leverkusen Joao Moutinho Football
Get the latest Cricket news, check out the India cricket schedule, Cricket live score . Like us on Facebook or follow us on Twitter for more sports updates. You can also download the NDTV Cricket app for Android or iOS.