It is a first ever international call up for Michu, who has scored five times for Swansea this season following an incredible debut campaign in the Premier League with 22 goals last season. 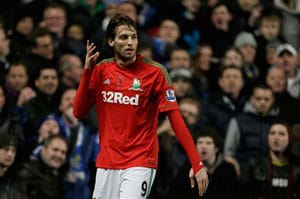 Swansea City forward Michu has been called into the Spain squad for next week's World Cup qualifiers against Belarus and Georgia after David Villa was forced to pull out due to arthritis in his left ankle.

It is a first ever international call up for Michu, who has scored five times for the Welsh side this season following an incredible debut campaign in the Premier League with 22 goals last season.

Villa, who is Spain's all-time leading international scorer, was forced off just before the hour mark of Atletico Madrid's 2-1 win over Celta Vigo on Sunday.

"The Asturian player is suffering from arthritis in his left ankle, the medical services of the Spanish Football Federation (RFEF) have been informed, which will make his presence in the squad managed by Vicente del Bosque impossible," the RFEF said in a statement.

Villa has featured in every one of Atletico's 12 games in all competitions this season, scoring three goals as Diego Simeone's men have made a flying start to the campaign.

And Simeone is hopeful Villa will be fit for Atletico's next match against Espanyol in two weeks' time.

"He went off with some problems in his ankle. I imagine that in a short while it will respond and he will be fine," he said.

Del Bosque has already had to call up Real Sociedad's Inigo Martinez to replace the injured Raul Albiol.

Spain need just four points from their remaining two qualifiers to guarantee their place at next year's World Cup finals in Brazil.

Comments
Topics mentioned in this article
Football Dmitri Michurenkov Barcelona Spain Bayern Munchen
Get the latest updates on ICC T20 Worldcup 2022 and CWG 2022 check out the Schedule, Live Score and Medals Tally. Like us on Facebook or follow us on Twitter for more sports updates. You can also download the NDTV Cricket app for Android or iOS.