Messi scored for an eighth straight Spanish league game by converting a penalty in Barcelona's 4-0 thrashing of crosstown rival Espanyol while Ronaldo struck a double vs Real Sociedad. 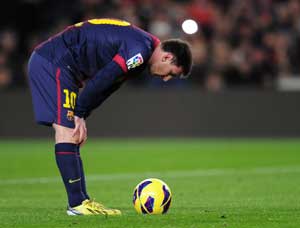 Lionel Messi and Cristiano Ronaldo both scored to help their teams win in the Spanish league on Sunday, a day before the two stars and Andres Iniesta vie for the FIFA Ballon d'Or prize.

Messi scored for an eighth straight Spanish league game by converting a penalty in Barcelona's 4-0 thrashing of crosstown rival Espanyol, while Ronaldo netted twice in a three-minute span to give 10-man Real Madrid a hard-fought 4-3 victory over Real Sociedad.

Messi, who finished 2012 with a record 91 goals, is the favorite to win the Ballon d'Or for an unprecedented fourth time. Ronaldo collected the award in 2008. Messi's teammate, Iniesta, has never won football's highest individual honor.

"Andres would love to win it, just like Leo," said Barcelona forward Pedro Rodriguez, who scored twice. "I hope one of them wins it."

Despite a fan and media backlash after last round's loss, Mourinho again started rarely used Adan Garrido. But the 'keeper was sent off after giving away an early penalty, forcing the introduction of Casillas.

The crowd at Santiago Bernabeu stadium voiced its displeasure with Mourinho by jeering the coach's name when it was announced before the game and cheering for their beloved Casillas.

Mourinho said he wasn't bothered by the boos.

"Perfect. They can whistle at me if they want and then support the team," Mourinho said. "I think the jeers are for dropping Casillas, and I think that they are because we are far from our objectives in the league. I accept them both."

Madrid's fans, however, couldn't have asked for a better start just two minutes in when Sociedad's unbalanced defense left Karim Benzema unmarked to receive Khedira's pass and score with ease.

Madrid's lead didn't last long and it again appeared to show that Mourinho's choice in goal was misguided.

Adan was overwhelmed last round when he conceded three goals in the loss at Malaga, and he was shown to be out of his depth at home as well.

He made a poor pass that Carlos Vela intercepted, and then charged out and fouled the Mexico forward in his box. The referee didn't hesitate to show him a direct red card, creating the dramatic situation of Casillas being called off the bench to defend the penalty attempt. 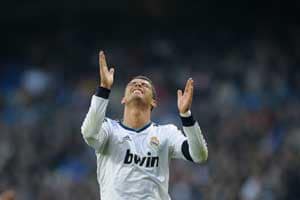 The crowd chanted "Iker! Iker!" as the Spanish international jogged on, refusing to take the captain's armband from Ronaldo. But there were no heroics as Prieto coolly stroked in the spot kick to equalize in the ninth minute.

"I told Adan before this match and the Malaga match that the jeers he might hear were for me, not for him," said Mourinho. "There's been a lack of respect for Adan."

Despite being short a man, Madrid pressed forward and deservedly went in front in the 35th through Sami Khedira's crafty back-heeled flip to redirect a cross between the posts.

Prieto beat Casillas to restore parity at 2-2 five minutes later, but Ronaldo gave Madrid control of the match in the 68th when Benzema stole the ball and played the Portugal winger in behind the defense to score.

Ronaldo then earned a free kick on the left corner of the area and blasted the ball over goalkeeper Claudio Bravo in the 70th.

Prieto appeared to give Sociedad late hope when he scored inside the far post in the 76th, but Sociedad never threatened again after Daniel Estrada was booked for a second time, leaving the visitors with 10 men for the final 10 minutes.

Barcelona continued its record start with 17 wins and a draw to maintain its 16-point lead over third-place Madrid.

Second-place Atletico Madrid, meanwhile, fell 11 points behind Barcelona after conceding an 87th-minute equalizer at Mallorca for a 1-1 draw. Raul Garcia put Atletico ahead in the 73rd, but Kevin Garcia leveled after a defensive lapse to split the points.

Barcelona coach Tito Vilanova returned to the touchline for the first time since undergoing throat surgery to remove a second tumor in two years on Dec. 20.

Barcelona dominated Espanyol from the start at Camp Nou stadium and made quick work of the relegation-threatened side after Xavi Hernandez scored in the 10th from a pass by Iniesta.

Pedro then volleyed in a cross from Cesc Fabregas in the 15th before chipping in Sergio Busquets' perfectly weighted pass in the 27th.

Two minutes later, Messi scored from a spot kick after Fabregas had been fouled by goalkeeper Kiko Casillas in the area. The loss was Espanyol's first in five games under new coach Javier Aguirre.

Last season, Messi set a league record with 50 goals. He already has 27 before the season's midway point. Atletico striker Radamel Falcao is next with 17th, followed by Ronaldo's 16.

Comments
Topics mentioned in this article
Football Barcelona Real Madrid Cristiano Ronaldo Lionel Messi
Get the latest updates on ICC T20 Worldcup 2022 and CWG 2022 check out the Schedule, Live Score and Medals Tally. Like us on Facebook or follow us on Twitter for more sports updates. You can also download the NDTV Cricket app for Android or iOS.