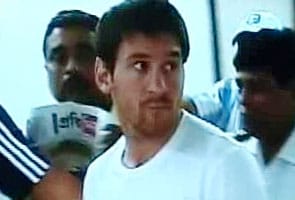 Over two thousand delirious soccer lovers gave sleep a miss as they danced, cried and shouted slogans eulogising football magician Lionel Messi, who arrived in Kolkata early on Wednesday amid stringent security. The forward is in the city for Friday's first ever FIFA official international friendly in the Indian sub-continent featuring Argentina and Venezuela.

However, the large number of people, who were waiting for hours at the Netaji Subhas Chandra Bose International Airport to welcome the Argentine superstar, were left heartbroken as the organisers packed him into a vehicle from the tarmac and drove him out of the airport through a sidegate.

"I can only say that Messi is in town," said Bhaswar Goswami, executive director of Celebrity Management, promoters of the match at the Salt Lake Stadium.

Messi was accompanied by his Barcelona FC teammate Javier Mascherano. The duo reached the eastern Indian metropolis after playing the club's La Liga game with Villareal on Monday. Messi scored twice in the second half as Barca cantered to a 5-0 victory.

Soccer lovers, who had defied a drizzle to assemble in large numbers to welcome their hero in the wee hours, failed to get a glimpse of the Argentine genius, who was driven straight to the team hotel near the stadium.

Earlier the crowd of mostly die hard fans of the 24-year-old football icon made it a carnival atmosphere in the airport's vicinity.

Many sported the sky blue and white jerseys of the Argentine team, and carried flags of the Latin American side. Wild cheers of "Messi, Messi" were heard constantly.

"We will stay here the whole night. For the next few days we will only relish every minute of the historic occasion," said Manas Dutta of the Nabin Sangha Fans Club, wearing Messi's number 10 jersey.

Some of the soccer fans also had their faces painted in the colours of the Argentine or the Barcelona jerseys with Messi written on their bare chests.

Some of the Messi fans seemed emotional, with tears of joy rolling down their cheeks at the once-in-a-lifetime opportunity to see their hero from close range.

"I can do anything to have a glimpse of Messi today. I will see him today," said a young man, who wore a Barcelona jersey with Messi's picture.

A group of youngsters were seen going round and round holding a big Argentine flag atop their head.

A middle aged father came with his young daughter and son, the latter an ardent Messi fan. "We are a middle class family. But to catch a glimpse of Messi we are even prepared to have lunch and dinner at the hotel where Messi would be staying. We are prepared to bear all costs," said the teenage son.

However, the turnout of the soccer buffs to greet Messi fell far short of the 50,000 odd crowd which had gathered in 2008 to welcome football legend Diego Maradona who had come on a two-day trip to the city to attend a host of programmes.

Comments
Topics mentioned in this article
Football Venezuela Argentina Neymar Lionel Messi
Get the latest updates on IPL 2021, check out the IPL 2021 Schedule and Indian Premier League Live Score . Like us on Facebook or follow us on Twitter for more sports updates. You can also download the NDTV Cricket app for Android or iOS.