Although Meghalaya boys teams have won the U-17 title in earlier editions, this is the first time that this particular school team will appear in the title clash. 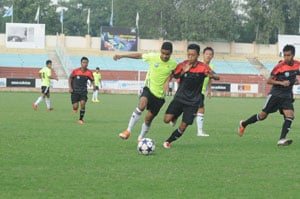 OM Roy High School, Shillong, Meghalaya entered the U-17 Boys' final while RMSM Vidhyalaya, Nambol, Manipur secured a spot in the girls' title clash in the 54th Subroto Cup football at the Ambedkar Stadium in New Delhi on Saturday.

Both the girls and boys teams will play in their respective finals for the first time.

Although Meghalaya boys teams have won the U-17 title in earlier editions, this is the first time that this particular school team will appear in the title clash.

The clash between Army Boys and Meghalaya was an exciting, fast paced one. Both teams were equally matched although the taller, stronger Army Boys enjoyed considerable physical advantage over the smaller but quicker Meghalaya players.

However, Meghalaya's superior fitness saw them through as they pumped in three goals in the second session. Suting converted two penalties within a span of four minutes while Jimmyson scored in injury time to complete the tally.

In the girls' section, RMSM Vidhyalaya, Nambol, Manipur booked a spot in the final with an easy 5-1 win over Reverend Saiaithanga Memorial School, Aizawl, Mizoram. The girls from Manipur did not face too much trouble from their rivals and a hat-trick from D Grace in the first half and another couple of goals by Ratanbala Devi after the break were enough to see them through.

Meanwhile, in other U-17 boys' matches, Troeschina of Ukraine had to fight hard for a 2-0 win over Police High School, Baripada, Odisha. The Ukraine team, who had won the UNICEF Cup in Spain recently, found it tough to break down the Odisha team who suffered their first defeat in the tournament.

Comments
Topics mentioned in this article
Football Liverpool Real Madrid Celtic Manchester United Aston Villa Stewart Downing Megan Louise Schutt
Get the latest updates on ICC T20 Worldcup 2022 and CWG 2022 check out the Schedule, Live Score and Medals Tally. Like us on Facebook or follow us on Twitter for more sports updates. You can also download the NDTV Cricket app for Android or iOS.