Leicester City's 15-goal top scorer Jamie Vardy is expected to be fully fit for the clash against Manchester City. 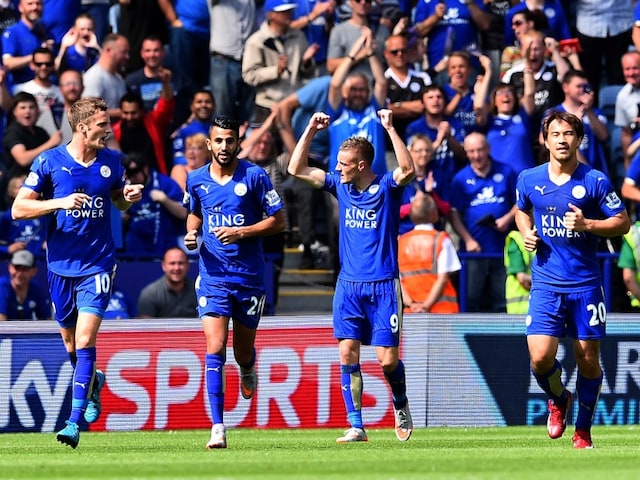 Leicester City have been the surprise package of the Premier League this season and still continue to top the table with 38 points. © AFP
London:

Albrighton has warned City that Leicester are not about to implode after suffering only their second defeat of the season on Boxing Day. (Jurgen Klopp Braced For Impressive Leicester City)

"We see this as a test," the winger said on Monday.

"There will probably be a lot of pundits and media that might think now we are going to lie down and relax with our 30-something points.

"We're not a side to do that. We've got Manchester City on Tuesday and we look forward to bouncing back against them.

"We've got ourselves in a brilliant situation and we are doing fantastic. Everyone was tipping us to be down there at the start of the season, but we're right in the mix and we deserve to be where we are."

Vardy's understanding with Algeria playmaker Riyad Mahrez has been crucial to the Foxes' success this season - between them, they have scored 29 of Leicester's 37 goals.

The fact that neither of them looked fully fit against Liverpool will be of concern to manager Claudio Ranieri ahead of another key fixture.

"The spirit in the camp now is not so good, but that is a good thing, because the players always want to try to win.

"Now we have to clean our minds and think towards the next match. It will be another big test, but we are ready."

Ranieri is unlikely to make significant changes, as long as Vardy and Mahrez are both declared fit, and will look for his side to show the stamina he talked so positively about in the lead-up to the Christmas fixtures.

Kompany meanwhile was making his first appearance for seven weeks when he entered the field as a second-half substitute during City's 4-1 win over Sunderland on Friday, but lasted only nine minutes before hobbling off again.

The bad news for manager Manuel Pellegrini is that the central defender has suffered a recurrence of the calf injury that has troubled him for much of the season, and the fear is that he will be out for several weeks.

Comments
Topics mentioned in this article
Leicester City Manchester City Liverpool Marc Albrighton Vincent Kompany Football
Get the latest Cricket news, check out the India cricket schedule, Cricket live score . Like us on Facebook or follow us on Twitter for more sports updates. You can also download the NDTV Cricket app for Android or iOS.