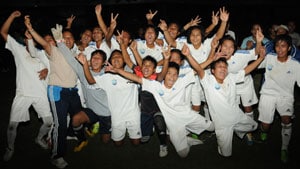 Linthoingambi played a huge role in the outcome, saving quite a few attempts in regulation time before holding her nerves to save an attempt from Ritu of Haryana during the penalty shootout.

This is the second time that a team from Manipur has won the Girls' title.

It turned out to be a fitting finale with two equally matched teams fighting it out tooth and nail.

Having outclassed most of their opponents in the previous matches, Manipur were expected to canter home with an easy victory, but Haryana had other ideas.

Though speedy, skillful players from Manipur were a little bit superior in the technical aspects, Haryana made up for that to a large extent with their gutsy display in their maiden final appearance.

The team from the north-east dominated the early exchanges and Ratanbala Devi handed Manipur the lead in spectacular fashion, almost effortlessly dribbling past two rival defenders before punching the ball into the net.

Undaunted by the setback, Haryana continued to fight hard and they were almost rewarded for their perseverance when their winger Sanju sped down the left sideline before cutting in to unleash a powerful shot, which forced a nice save from goalkeeper Linthoingambi.

The start of the second half saw Haryana build up several attacks on the Manipur goal and almost inevitably they forced the equaliser through Nisha in the 42nd minute of play. She lashed on to an excellent pass from Sanju from the left.

With the teams equally matched in regulation time, the match rolled into extra-time, which turned out to be goalless.

In the U-17 Boys' category, Magurmari High School, Kokrajhar (Assam) rode on a splendid strike from Jwngbla Brahma to edge out Reverend Saiathanga Memorial (Mizoram) to enter in the final.

The match was a well contested affair and both teams were equally matched until Brahma's late strike decided the outcome.

Comments
Topics mentioned in this article
Football Liverpool Celtic Real Madrid Manchester United Aston Villa Stewart Downing
Get the latest updates on ICC T20 Worldcup 2022 and CWG 2022 check out the Schedule, Live Score and Medals Tally. Like us on Facebook or follow us on Twitter for more sports updates. You can also download the NDTV Cricket app for Android or iOS.