Manchester United has priced its public offering at $14 per share, below the $16 to $20 per share price range that had been widely anticipated. 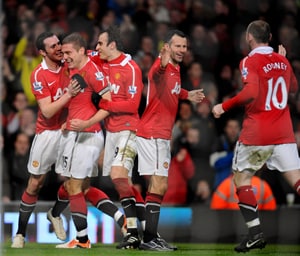 Manchester United has priced its public offering at $14 per share, below the $16 to $20 per share price range that had been widely anticipated.

The English club said Thursday that that the stock will begin trading on the New York Stock Exchange on Friday.

Manchester United is trying to pay off more of the heavy debt piled on the club in its 2005 takeover by the Glazer family.

The 134-year-old club, with a record 19 English championships, is one of the most well-known teams on the planet. That's made its IPO a widely anticipated event.

But some analysts say the debt-ridden team is overvalued and the offering is dependent on investors wearing their fan colors rather than their financial thinking caps.

"It's really trading on the level of fan interest as opposed to any sort of financial interest," said Sam Hamadeh, CEO of PrivCo LLC, which researches privately held companies. "A winning team does not make a winning investment."

The Glazers are a U.S. family who also own the Tampa Bay Buccaneers American football team. Malcolm Glazer is CEO of First Allied Corp., a holding company with many business interests. His two sons Avram and Joel are co-chairmen of Manchester United.

After the stock offering, the Glazers will keep control of the team through Class B shares with 10 times the voting power of the stock that would be sold to the public.

The team is one of the most celebrated in the world. It claims 659 million followers and 26.9 million Facebook fans. It is especially popular in Asia, where its games are televised and its replica shirts and other products are huge sellers. But analysts are more skeptical when it comes to how viable as a financial commodity the Red Devils will be, because it is not a high-growth company like a tech startup and is heavily in debt.

But deals such as these are only one-third of the business, said Renaissance Capital analyst Nick Einhorn. The other two-thirds comes from less-glamorous broadcast and ticket sales. Those aren't as high-growth areas as commercial revenue because prices increase more gradually over time. And ticket and broadcast revenue depends on how far the team goes in English and European competitions.

"The club has to convince investors that the growth they're getting from the commercial segment outweighs the less exciting broadcasting and matchday pieces," Einhorn said.

Pouring a lot of money into the stock doesn't make sense, said PrivCo's Hamadeh. The IPO price made the club the most valuable sports team on the planet at around $2.2 billion, bettering the record $2 billion paid for the Los Angeles Dodgers baseball team.

And slashing the debt the Glazers loaded on the club has been a constant challenge, with the commercial operation ramped up and a London suite of offices employing dozens of people to squeeze every pound out of the brand.

The team expects to report a loss for the year ended June 30, excluding a tax credit, with revenue down 3 percent to 5 percent.

"You're really buying a team that is way overpriced, with no financial justification for the value," Hamadeh said.

Analysts aren't the only skeptics. Protests have raged against the Glazers since they bought the club and delisted it from the London market in 2005. Fans have sent more than 1 million messages against the IPO to the club sponsors and banks, rallying against the IPO and the Glazers' ownership of the team.

But others are more positive.

"It's fairly rare for a team to be in a position to go public, but obviously Manchester United has exposure to domestic and international deals where there's a lot of growth," said Philip Hall, a partner at New York-based investment bank Inner Circle Sports, who advised on the 2010 takeover of Liverpool by Boston Red Sox owner John Henry.

Manchester United will trade under the "MANU" ticker.

Comments
Topics mentioned in this article
Football Arsenal Chelsea Manchester United Wayne Rooney Alex Ferguson
Get the latest updates on ICC T20 Worldcup 2022 and CWG 2022 check out the Schedule, Live Score and Medals Tally. Like us on Facebook or follow us on Twitter for more sports updates. You can also download the NDTV Cricket app for Android or iOS.