Manchester United now have to contemplate an unwanted run in the Europa League, Europe's second-tier competition, which they won in 2017. 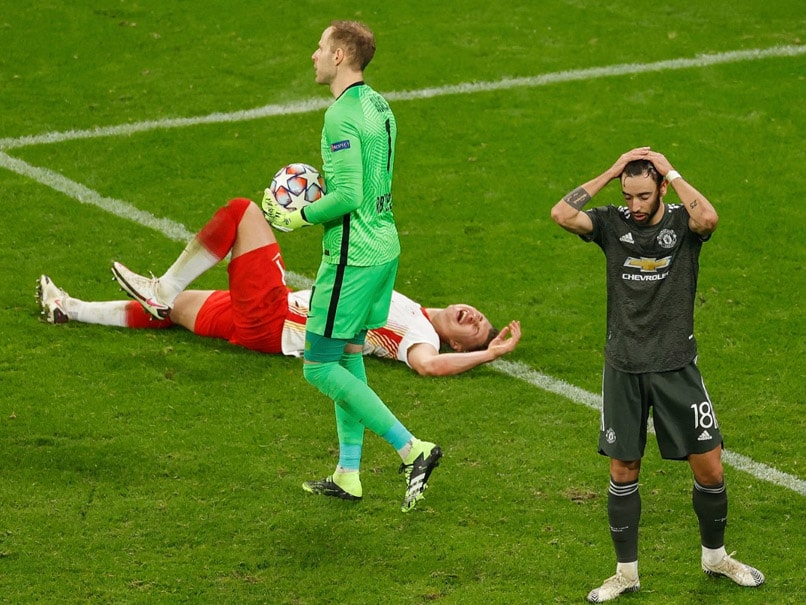 Manchester United were inches away from pulling off one of their trademark miracle comebacks.© AFP

Manchester United's third appearance in a Champions League final in four years in 2011, was proof they had established themselves as European football heavyweights. But their ejection at the group stage of this season's competition at the hands of RB Leipzig on Tuesday, is yet more stark evidence of how far they have fallen since the Alex Ferguson era. Ole Gunnar Solskjaer's men battled hard last season just to qualify for the Champions League and had one foot in the knockout stages, after an away win against Paris Saint-Germain followed by a 5-0 hammering of Leipzig at Old Trafford. But a shock defeat away to Istanbul Basaksehir made life difficult and a home defeat to PSG, followed by the 3-2 defeat in Germany dumped them out of the competition.

United now have to contemplate an unwanted run in the Europa League, Europe's second-tier competition, which they won in 2017.

The three-time European champions still see themselves as continental royalty but their record over the past decade makes for grim reading.

Since the 2011 final, in which they were beaten by Barcelona, the furthest they have gone is the quarter-finals, in 2014 and 2019.

They have won just two individual knockout matches in the Champions League in 10 seasons.

Solskjaer took responsibility for United's chastening exit in Leipzig, after his side went 3-0 down before mounting a late and ultimately fruitless comeback.

"We didn't perform as a team well enough and that's always the manager's responsibility, to get everyone ready," he said.

United were inches away from pulling off one of their trademark miracle comebacks but it was not to be.

The late drama should not obscure the problems United face -- they looked disorganised at the back after switching to a back five and were outclassed by last season's semi-finalists in the first half.

Captain Harry Maguire said the players had to look at themselves.

"It's a tough group but we felt we should get through," he told BT Sport. "That's the standards of this club. I'm gutted for everyone, we worked so hard to reach this competition. No matter what group we got, it would be tough. We have to do more."

Former United players Rio Ferdinand and Paul Scholes, who were crucial parts of Ferguson's teams, believe United need more of an identity and want to see an end to the chopping and changing of personnel and formations.

"I think Manchester United need to have a plan, a strategy of playing consistently, so that players can start to build relationships based off of memory, based off of knowing where people are going to be on the pitch,' Ferdinand told BT Sport.

"Until you do that, you won't have sustained success. You might have the odd result, but you will not have consistency which they are lacking."

The club remains committed to Solskjaer, whose exploits as a player mean he retains great credit with supporters.

But there is a sense that they are only ever one or two games from a crisis, and the speculation over the Norwegian manager's future never entirely disappears.

"There are managers in the Premier league that are below Ole Gunnar Solskjaer that have got great reputations that don't get the stick that Ole gets," he said.

"The narrative from inside the club is far different from outside, where there just seems to be a total witch-hunt to get this boy out of a job," he added.

One handy habit Solskjaer does have is his ability to conjure up a big result after a major disappointment.

He has a chance to switch the narrative again on Saturday, at home to Manchester City.

Paris SG Harry Maguire Rio Ferdinand Football
Get the latest updates on Fifa Worldcup 2022 and check out  Fifa World Cup Schedule, Stats and Live Cricket Score. Like us on Facebook or follow us on Twitter for more sports updates. You can also download the NDTV Cricket app for Android or iOS.