Manchester United moved into the League Cup fourth round with a 3-0 win at Luton, while West Ham boss David Moyes and two of his players contracted the coronavirus ahead of their 5-1 victory against Hull as the pandemic caused chaos on Tuesday. 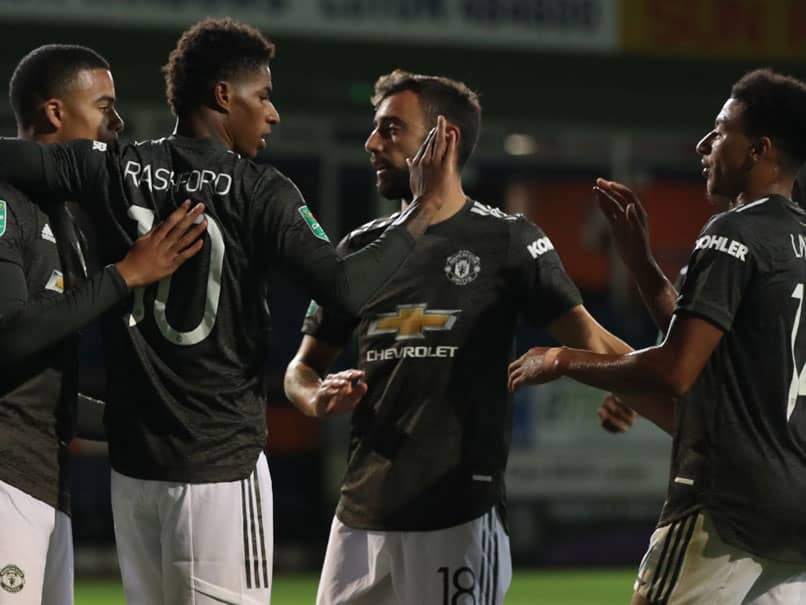 Manchester United moved into the League Cup fourth round with a 3-0 win at Luton, while West Ham boss David Moyes and two of his players contracted the coronavirus ahead of their 5-1 victory against Hull as the pandemic caused chaos on Tuesday. Moyes, Josh Cullen and Issa Diop all left the London Stadium after learning of the tests before kick-off and will self-isolate, with the trio said to be asymptomatic. West Ham were not the only Premier League club affected by the virus as Tottenham's tie at Leyton Orient was postponed after their fourth tier opponents suffered a Covid-19 outbreak.

West Ham's match went ahead as planned despite the virus tests, with assistant manager Alan Irvine taking charge of the Hammers.

"At 20 past six we suddenly got some information from our doctor and head physio to say there were three positive tests, the manager and the two players," Irvine said.

"We'd had contact insofar as we were in the same area of the stadium as David.

"We were shocked by the news. We've had so many tests and not had any positive. But we've been very particular about protocol right from the start."

West Ham will play Fleetwood or Everton in the last 16.

The news of the virus striking at football's heart came after British Prime Minster Boris Johnson dealt a major blow to the sport's financial future on Tuesday.

Johnson said fans would not be allowed back into stadiums in October as originally planned due to a spike in virus cases, measures that will remain in place for "perhaps six months".

At Kenilworth Road, United bounced back from a dismal 3-1 home defeat against Crystal Palace in their Premier League opener on Saturday.

United went ahead in the 44th minute when George Moncur fouled Brandon Williams and Juan Mata dispatched the penalty.

Henderson is hoping to replace the error-prone David De Gea after an impressive loan at Sheffield United last season.

He preserved United's advantage with his only save of the match in the final minutes, keeping out Tom Lockyer's header at the far post.

Marcus Rashford came off the bench to net in the 88th minute before fellow substitute Mason Greenwood's stoppage-time goal put a flattering gloss on the scoreline.

"Going through is the big thing. There are some positives, the keeper does his job and we scored some nice goals towards the end," said Solskjaer, whose side will travel to Brighton or Preston in the fourth round.

Henderson tweeted: "I dreamt about this my whole life. Unbelievable feeling to make my debut for the club I love."

Tottenham's clash with Orient has yet to be rearranged amid reports Jose Mourinho's men could be given a bye into the last 16, where they would face Chelsea or Barnsley.

Orient had revealed the positive cases on Monday after Tottenham paid for their opponents' testing, but the match was not called off until two hours before kick-off.

"If I was doing this again I would not do the testing - this is an incentive not to test and that is bad for football and bad for health and safety," Orient chairman Nigel Travis told the BBC.

West Bromwich Albion crashed out against second tier Brentford, losing 5-4 on penalties after a 1-1 draw at the Hawthorns.

Grady Diangana was the only Albion player to miss in the shoot-out and Christian Norgaard netted Brentford's winner to earn a tie against Fulham or Sheffield Wednesday.

Newport reached the competition's last 16 for the first time in their history as the fourth tier side beat Championship club Watford 3-1.

West Ham United Football Marcus Rashford
Get the latest updates on IPL 2020, check out the IPL Schedule for 2020 and Indian Premier League (IPL) Cricket live score . Like us on Facebook or follow us on Twitter for more sports updates. You can also download the NDTV Cricket app for Android or iOS.