Manchester United F.C.'s Phil Jones Out for a Month Due to Injury

Manchester United F.C. defender Phil Jones limped off during the second half of England's 2-0 win in their Euro 2016 qualifier in Switzerland on Monday and he is now likely to be out of action for at least four weeks. 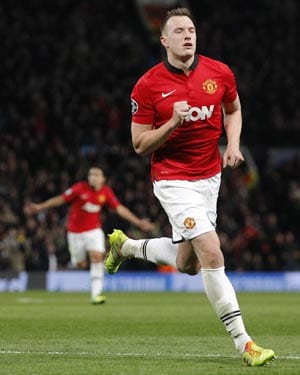 Manchester United defender Phil Jones has been ruled out for up to a month with a hamstring injury, manager Louis van Gaal said on Friday.  (Chelsea F.C.'s Jose Mourinho not surprised by Diego Costa's impact)

Jones limped off during the second half of England's 2-0 win in their Euro 2016 qualifier in Switzerland on Monday and he is now likely to be out of action for at least four weeks. (Arsenal ready for Manchester City test)

"Phil has a torn hamstring," van Gaal said. "He is maybe out for three weeks or a month." (Brazil legend Ronaldinho eyes Mexican glory)

If Jones is out for a month he will miss United's next four games and his place in the England squad for October's double-header against San Marino and Estonia will also be in doubt. (Falcao & Co. kick-start Manchester United's 'new era')

"Phil Jones was injured with the national team," van Gaal said. "And is now maybe out for three weeks to a month but that's difficult to say.

"And it is also not good to say that because I lay pressure on him. After three weeks you will say 'why is he not fit again' it's not good for the player," added the Dutchman, still to achieve his first competitive win as United boss ahead of Queens Park Rangers' visit to Old Trafford for a Premier League match on Sunday.

However, van Gaal confirmed that left-back Luke Shaw will be in contention to make his first United appearance since a pre-season move from Southampton after he overcame a hamstring injury.

Meanwhile Ander Herrera and Rafael both came through a behind-closed-doors game unscathed and should be in contention for a return.

"Luke Shaw is fit enough to play minutes, but not to play the whole game. There is a difference," van Gaal added.

New signings Daley Blind, Marcos Rojo and Falcao are also poised to make their full debuts while Angel di Maria is set to make his first appearance at Old Trafford.

Van Gaal also insisted he was not concerned at the prospect of how to accommodate all his star players into his favoured 3-4-1-2 formation.

"For a coach, it is always easy because he can decide. He decides always what he sees... I don't have any worries about that because I have done that already -- for more than 25 years," said van Gaal.

"You always want to buy the best players for the positions. I think we have done very good in the transfer window. Despite not being in the Champions League the players are coming to United.

"We have to produce results, and have to start that on Sunday against QPR."

Van Gaal added the goal of a top three finish in the Premier League, set by United chief executive Ed Woodward, was a realistic aim.

"We have spoken about the target," van Gaal explained. "When we have the meetings together and I think a club like Man United has to put targets.

"I put also targets. I don't think third is an unreasonable target. That does not mean that it shall not be difficult

"But a club such as United has to put targets. It's logical because Manchester United wants to be in the Champions League."

Former United defender Rio Ferdinand will face his old club at Old Trafford on Sunday but van Gaal said he had no regrets about his departure.

"There is a time to stay, and time to go. And I think he has decided to go," he explained.

"He was a great player -- and maybe still -- but there is always a time to go for a player in a club."

Comments
Topics mentioned in this article
Manchester United Phil Jones Football
Get the latest updates on Olympics 2020, Olympics 2020 Medal Tally, Live Cricket Score . Like us on Facebook or follow us on Twitter for more sports updates. You can also download the NDTV Cricket app for Android or iOS.