Manchester United dumped out of FA Cup by Swansea

Wilfried Bony snatched a dramatic last-minute winner as United crashed out at the first hurdle in the FA Cup to give beleaguered manager David Moyes even more problems. 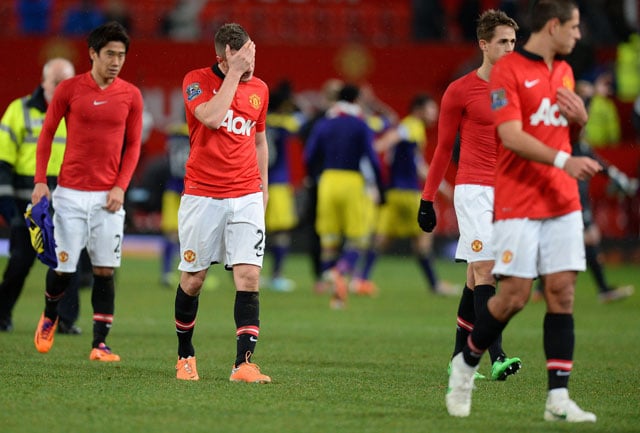 Wilfried Bony snatched a dramatic last-minute winner as Swansea City heaped fresh misery on Manchester United with a shock 2-1 success in the FA Cup third round on Sunday.

Eleven points off the pace in the Premier League, where they have already lost six games, United crashed out at the first hurdle in the FA Cup to give beleaguered manager David Moyes even more problems.

To compound matters, United's injury list swelled further after Rio Ferdinand had to go off with a knee injury, while Fabio da Silva was sent off shortly after coming on to replace him.

"We were a bit unlucky to lose, but we probably didn't do enough to win it in the end," said Moyes, whose side visit Sunderland in the League Cup semi-finals on Tuesday.

"We made some opportunities, (but) not enough. When we went down to 10 men, we just needed to see it out and at least take a replay if that was what had to come about, but we didn't quite get that far."

In a game preceded by a minute's applause for late Portugal great Eusebio, who died on Sunday, Swansea took a 12th-minute lead through Wayne Routledge, who cantered onto a pass from Alejandro Pozuelo to lob Anders Lindegaard.

The hosts equalised four minutes later, Javier Hernandez volleying in a cross from Alexander Buttner, but they could not find a second goal.

Ferdinand had to hobble off due to injury late on and his replacement, Fabio, was sent off for a high challenge on Jose Canas shortly after coming on.

Worse was to follow at the death, with Routledge lifting a cross into the box from the left and Bony powering home a near-post header to add a new chapter of disappointment to the tale of United's unravelling season.

West Ham United also fell in the third round on Sunday, crashing to an embarrassing 5-0 defeat at second-tier Nottingham Forest, but Chelsea and Liverpool both progressed against lower-league opponents.

Chelsea beat in-form Championship side Derby County 2-0, with Liverpool avenging their shock defeat by third-tier Oldham Athletic in last season's competition with a 2-0 success at Anfield.

Chelsea enjoyed the best of the first half against Derby at Pride Park but they had to wait until the 66th minute before making the breakthrough against former England manager Steve McClaren's side.

Eden Hazard's trickery wide on the left yielded a free-kick and from Willian's wicked, in-swinging cross, John Mikel Obi glanced home a header to mark his 300th Chelsea appearance with his fourth goal for the club.

Oscar got on the score-sheet shortly afterwards, gathering a pass from Hazard and beating Lee Grant at his near post with a powerful shot.

Chelsea manager Jose Mourinho highlighted the importance of Mikel's goal, saying: "It was important for us because we were dominating and dominating, creating and creating, but the goal was not arriving. It was like the winning goal."

Liverpool will visit either Bournemouth or Burton Albion in round four after seeing off Oldham, who stunned Brendan Rodgers's side 3-2 at Boundary Park in the fourth round last season.

Iago Aspas, a close-season signing from Celta Vigo, broke the deadlock in the 54th minute by dispatching a cross from Raheem Sterling to claim his first goal for the club.

Liverpool did not secure victory until Oldham's James Tarkowski put through his own goal with eight minutes to play.

West Ham became the second Premier League team to be eliminated by lower-league opposition in this season's competition when they were crushed 5-0 by Championship side Forest at the City Ground.

A day after Aston Villa fell to third-tier Sheffield United, West Ham were undone by a 14-minute hat-trick from Forest forward Jamie Paterson, sandwiched by an early Djamel Abdoun penalty and a late Andy Reid strike.

West Ham manager Sam Allardyce made nine changes to his starting XI and gave debuts to three young players, but he told ITV: "What choice did I have? I don't think I had one.

"I make the decisions for the benefit of everyone at the football club. We have a huge amount of problems in terms of available players."

Sunderland overcame third-tier Carlisle United 2-1 at the Stadium of Light to take their place in round four.

Adam Johnson put Sunderland ahead with a fine 34th-minute free-kick and then supplied the cross from which Sean O'Hanlon put through his own goal after Matty Robson had levelled the scores.