El Shaarawy was the Rossoneri's top scorer in the first half of last season but hit a dry patch following the signing of Mario Balotelli. 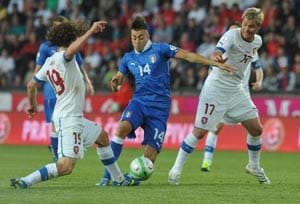 El Shaarawy was the Rossoneri's top scorer in the first half of last season but hit a dry patch following the signing of Mario Balotelli.

The 20-year-old half-Egpytian, half-Italian, who wears a distinctive mohican-style haircut, is called the 'Little Pharaoh' and is a fans' favourite at the San Siro.

Gazzetta claims Milan could give in to City's "pressing" and let El Shaarawy leave the club. The same report linked Kevin Prince Boateng with a move to Chelsea and fellow forward Robinho with Brazilian side Santos.

El Shaarawy, who alongside club-mate Mario Balotelli played for Italy in a scoreless draw against the Czech Republic on Friday, finished the season with 16 goals in 37 games.

He cost AC Milan approximately 15.5 m euros when the club bought him from Genoa and has emerged into one of the most exciting forward prospects in Italy.

El Shaarawy has already been the subject of transfer speculation this season with reports claiming Milan rejected a bid from Napoli in January.

Milan finished third in Italy's Serie A, which ended three weeks ago, and will have to play a two-leg preliminary round tie to qualify for the Champions League group stages.

Comments
Topics mentioned in this article
Football Inter Milan AC Milan Stephan El Shaarawy
Get the latest updates on IPL 2020, check out the IPL Schedule for 2020 and Indian Premier League (IPL) Cricket live score . Like us on Facebook or follow us on Twitter for more sports updates. You can also download the NDTV Cricket app for Android or iOS.