In the all-Premier League matchup, Argentina striker Sergio Aguero came off the bench to score an 83rd-minute winner in Manchester City's 1-0 victory over Arsenal at Emirates Stadium. Second-tier Cardiff beat Blackburn 2-0 in the other quarterfinal. 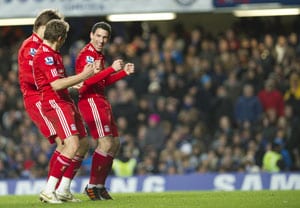 Distraught by the death of a former international teammate, Craig Bellamy was too upset to play for Liverpool in the Premier League on Sunday.

Two days later, however, the Wales striker was back in action and inspiring the team to a 2-0 victory over Chelsea in the League Cup quarterfinals - the first part of a northwest double over London sides in England's second-ranked club competition on Tuesday.

In the other all-Premier League matchup, Argentina striker Sergio Aguero came off the bench to score an 83rd-minute winner in Manchester City's 1-0 victory over Arsenal at Emirates Stadium. Second-tier Cardiff beat Blackburn 2-0 in the other quarterfinal.

All three matches were preceded by a minute's applause in honor of Wales manager Gary Speed, who was found by his wife hanged at his home early on Sunday morning.

Bellamy, who played alongside Speed in the national team, was particularly distressed by the news and was omitted from the Liverpool team that drew 1-1 against Manchester City hours later.

Bellamy made his return against Chelsea, holding back the tears prior to kickoff before going on to play an instrumental role in Liverpool's dismantling of the hosts, who slipped to a fifth defeat in their last nine matches in all competitions to pile the pressure on manager Andre Villas-Boas.

Bellamy set up Maxi Rodriguez for the opening goal in the 58th minute and whipped in a superb free kick five minutes later that was nodded in by Martin Kelly.

"Speedo was regarded as his mentor," Liverpool manager Kenny Dalglish said of Bellamy. "To come back and play like that speaks volumes."

City, which is five points clear at the top of the Premier League, transferred its form to the League Cup, edging past Arsenal thanks to Aguero's goal on the counterattack.

Having come off the bench midway through the first half, Aguero met a pass from Adam Johnson with a thumping shot past Arsenal goalkeeper Lukasz Fabianski as City eliminated Arsene Wenger's side in the quarterfinals for the second time in three seasons.

"It's better to win here in the Premier League," City manager Roberto Mancini said. "But it's a good feeling because we're in the semifinals of this competition."

Manchester United looks to become the third northwest power to make the semifinals when it hosts Crystal Palace in Wednesday's only match.

Chelsea was unfortunate to lose 2-1 to Liverpool in the league on Nov. 20 but was outclassed 10 days later, even though Liverpool was playing just 48 hours after a grueling match against City.

"It's a pity for us," Villas-Boas said. "We had a good chance to progress at home but Liverpool were far superior."

Andy Carroll wasted a glorious chance to put Liverpool ahead, blasting a 22nd-minute penalty straight at Chelsea goalkeeper Ross Turnbull after Alex was penalized for handling the ball in his own box.

Rodriguez made no mistake from close range just before the hour, though, tapping home at the far post after running onto an inch-perfect cross by Bellamy, who had broken the offside trap on the right wing.

England under-21 defender Kelly then wrapped up a deserved win for the Reds, the record seven-time winners of the competition.

"I don't know if we took Chelsea apart but we were delighted with the way we played," Dalglish said. "We've had a good day and we deserved to go through."

Chelsea's defeat - its third in a 10-day span in three different competitions - will be another tough pill to swallow for Villas-Boas, who had to deal with chants from Liverpool's vocal fans of "You're getting sacked in the morning" in the second half.

With the Blues 10 points off the lead in the Premier League and facing possible elimination from the Champions League, their best chance of silverware may have been the League Cup.

They were poor throughout, with their midfield totally dominated and striker Fernando Torres - a 50 million pounds ($81 million) signing from Liverpool in January - anonymous.

"We need to get our fans behind us and get the emotions right. You can feel Stamford Bridge has become anxious," Villas-Boas said. "We need atmosphere to get us past this period."

Arsenal's hopes of making the semifinals for the fifth time in seven seasons were dashed by a City team containing two former Gunners - playmaker Samir Nasri, who joined in the summer for 25 million pounds, and defender Kolo Toure.

Every time Nasri touched the ball, he was booed and the France international was also on the receiving end of a number of chants, including "You only quit for the money."

Arsenal officials were also forced to reject rumors that punches were thrown between Nasri and Arsenal midfielder Emmanuel Frimpong in the tunnel after the match, saying that only words were exchanged. There appeared to be tensions between the two during the match.

City is looking to add another cup to its trophy haul after winning the FA Cup last season to end a 35-year wait for major silverware.

"It's better to win here in the Premier League," Mancini said. "But it's a good feeling because we're in the semifinals of this competition."

Scotland striker Kenny Miller gave Cardiff the lead in the 19th against Blackburn before Anthony Gerrard - the cousin of Liverpool midfielder Steven Gerrard - wrapped up the win five minutes after the break for the team currently third from top in the League Championship.

Comments
Topics mentioned in this article
Football Craig Bellamy Inter Milan Liverpool Manchester City Obafemi Martins Arsenal Laurent Koscielny Jack Wilshere
Get the latest Cricket news, check out the India cricket schedule, Cricket live score . Like us on Facebook or follow us on Twitter for more sports updates. You can also download the NDTV Cricket app for Android or iOS.