Frank Lampard and Edin Dzeko each scored twice as Manchester City strolled to victory with seven second-half goals at the Etihad Stadium against Sheffield Wednesday, setting up a home game with either Crystal Palace or Newcastle United. 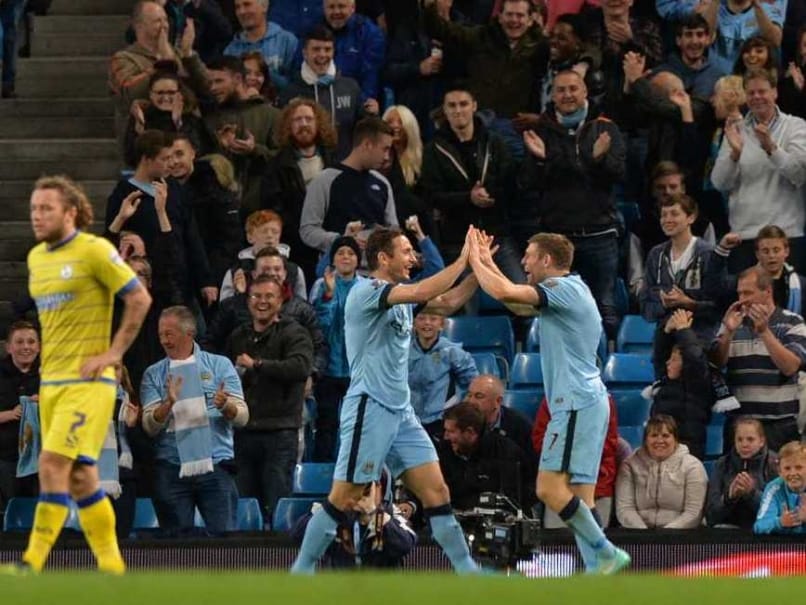 Frank Lampard and Edin Dzeko each scored twice as City strolled to victory with seven second-half goals at the Etihad Stadium, setting up a home game with either Crystal Palace or Newcastle United.

Lampard broke the deadlock in the 47th minute, tapping home a low cross from James Milner at the near post to score his second goal in two games following Sunday's equaliser against his former club Chelsea.

Dzeko turned in a Jesus Navas cross in the 53rd minute and Navas made it 3-0 with a jinking run and fierce shot a minute later.

Yaya Toure added a fourth from the penalty spot on the hour after Kamil Zayatte had been sent off for tripping Lampard, before late goals from Dzeko, substitute Jose Pozo and Lampard completed the rout.

Chelsea gave a first appearance of the season to goalkeeper Petr Cech and took a 25th-minute lead when debutant Kurt Zouma lashed home at the second attempt after Gary Cahill's header was blocked at a corner.

Matt Mills equalised for Bolton six minutes later with a deep header from a free-kick that crept inside Cech's right-hand post, but Oscar gave Chelsea victory in the 55th minute with a low long-range drive.

Chelsea will visit fourth-tier Shrewsbury Town in round four.

Meanwhile, Tottenham Hotspur had to come from behind to win 3-1 at home to Nottingham Forest.

Championship leaders Forest made a bright start, hitting the bar through Ben Osborn's curler, and took the lead in the 61st minute when 19-year-old Jorge Grant tucked in a Lars Veldwijk cross.

But substitute Ryan Mason drew Spurs level with a 25-yard shot in the 72nd minute and late goals from Roberto Soldado and Harry Kane sent Mauricio Pochettino's side through.

Goals from Tom Ince and Robbie Brady put Hull 2-1 up after Brown Ideye had given the hosts a 15th-minute lead, but Gareth McAuley equalised in the 87th minute before Saido Berahino grabbed the winner a minute later.

The night's other all-Premier League tie went to extra time after Sullay Kaikai marked his Palace debut by making it 2-2 against Newcastle in injury time at Selhurst Park.

Arsenal were dumped out of the competition after losing 2-1 at home to Southampton on Tuesday, while Liverpool edged second-tier Middlesbrough 14-13 in a remarkable penalty shootout following a 2-2 draw at Anfield.

Southampton will visit Stoke City in the next round and Liverpool will tackle Swansea City, who beat their Merseyside rivals Everton 3-0 on Tuesday.

Comments
Topics mentioned in this article
Manchester City Chelsea Sheffield Wednesday Football
Get the latest updates on IPL Auction 2023 and check out  IPL 2023 and Live Cricket Score. Like us on Facebook or follow us on Twitter for more sports updates. You can also download the NDTV Cricket app for Android or iOS.