Manchester United have expressed interest in signing Germany goalkeeper Manuel Neuer from Schalke 04, the Bundesliga club's president was quoted as saying on Wednesday. 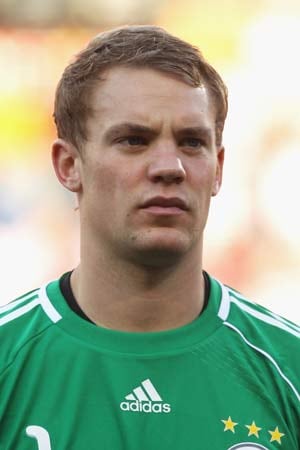 Manchester United have expressed interest in signing Germany goalkeeper Manuel Neuer from Schalke 04, the Bundesliga club's president was quoted as saying on Wednesday.

"An international agent has approached me and informed me that Manchester United are interested in Neuer. If we get a written request from Manchester we will look at it," Clemens Tonnies told the Bild daily.

It is not the first time that Neuer, who was Germany's man between the posts in their highly successful 2010 World Cup campaign, has been touted as a possible replacement for the retiring Edwin van der Sar at Old Trafford.

Neuer, who turns 25 later this month, is under contract until June 2012. He has also been linked to a move to German giants Bayern Munich.

"Manuel Neuer is the best goalkeeper in the world for me. If he is available, you have to get him," Germany legend and ex-Bayern president Franz Beckenbauer said last week.

Bayern are due to face Neuer's club Schalke in the semi-final of German Cup on Wednesday. In the final on May 21 the winner will take on second division MSV Duisburg.

Comments
Topics mentioned in this article
Football Bayern Munchen FC Schalke 04 Chelsea Arsenal Alex Ferguson Manchester United Wayne Rooney
Get the latest updates on ICC T20 Worldcup 2022 and CWG 2022 check out the Schedule, Live Score and Medals Tally. Like us on Facebook or follow us on Twitter for more sports updates. You can also download the NDTV Cricket app for Android or iOS.