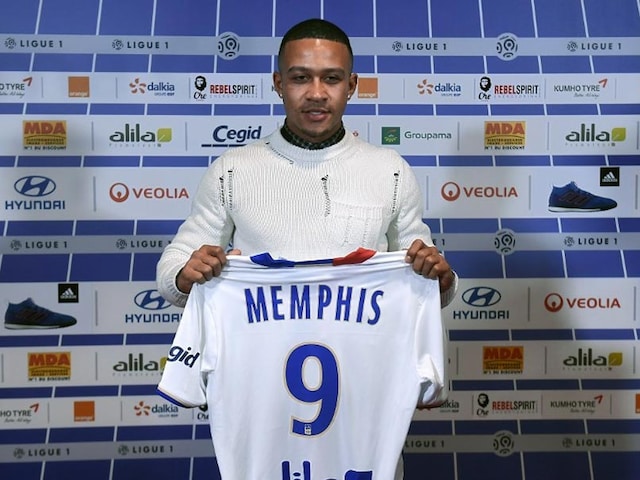 Memphis Depay signed for Lyon after failing to make a mark at Manchester United.© AFP

Lyon completed the signing of Netherlands international Memphis Depay from Manchester United on Friday for an undisclosed fee, the French club confirmed. Depay will be presented to the media at the club's training centre later on Friday and could make his debut in Sunday's Ligue 1 clash at home to Marseille. No financial details were released, but Lyon president Jean-Michel Aulas, asked by RMC Sport radio, suggested the deal was worth 16.5 million euros (17.5 million USD) plus "eight million in bonuses".

That would make Depay, capped 27 times at international level, Lyon's biggest signing since the club-record purchase of Yoann Gourcuff from Bordeaux for 22 million euros in 2010.

"Hungry to play for OL. I feel strong and ready to rise to the challenge #TeamOL," Depay wrote on his Twitter account.

"Thanks for all the memories during my time as a Red Devil. I will never forget all your support at @ManUtd. #RedDevils #ManUtd"

The 22-year-old joined United from PSV Eindhoven in June 2015, but the winger had a disappointing first season under compatriot Louis van Gaal and had made just one start in all competitions since Jose Mourinho became manager last July.

The deal reportedly includes buy-back and sell-on clauses, and Mourinho refused to rule out an eventual return to Old Trafford for the Dutchman.

"He didn't succeed in this 18 months, I would say, but he is very young so I think it is important for the club to keep control of this talent," said the Portuguese.

"And we all wish that he plays very, very well at Olympique Lyon and why not to come back because everyone here likes him."

Comments
Topics mentioned in this article
Football Manchester United Memphis Depay
Get the latest Cricket news, check out the India cricket schedule, Cricket live score . Like us on Facebook or follow us on Twitter for more sports updates. You can also download the NDTV Cricket app for Android or iOS.