Ramires and Bernard shone in midfield having been drafted into Scolari's starting lineup after injuries to Hulk (hamstring) and Oscar (ankle) during the week. 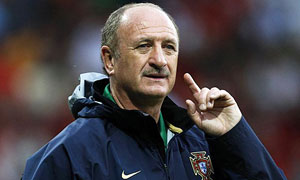 Ramires and Bernard shone in midfield having been drafted into Scolari's starting lineup after injuries to Hulk (hamstring) and Oscar (ankle) during the week.

"He is agile, fast and can be used either as an attacking midfielder or defender," Scolari said of Ramires, who also provided the assist for Neymar's goal

"The more versatile the player is, the better he is for me. He is a modern player who can help change the team's setup during a match if needed."

Bernard, who moved to Ukraine's Shakhtar Donetsk from Atletico Mineiro last month, set up both of Jo's goals and troubled Australia's defence with his pace on the right wing.

"He was great. He can play on either the right or left-hand side with excellent tactical awareness," Scolari said. "He is gaining points and cementing his place in the team."

Brazil will have just three days to recover before their friendly against Portugal in Boston while Australia's next match is against France in Paris, Oct 11.

Comments
Topics mentioned in this article
Football Bernard Ramires Luiz Felipe Scolari
Get the latest updates on ICC T20 Worldcup 2022 and CWG 2022 check out the Schedule, Live Score and Medals Tally. Like us on Facebook or follow us on Twitter for more sports updates. You can also download the NDTV Cricket app for Android or iOS.