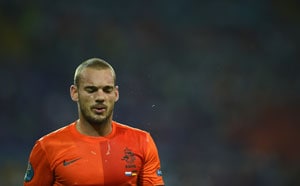 The 28-year-old who won the 2010 Champions League under Jose Mourinho before helping Holland to the World Cup final in South Africa counts 87 caps and 24 goals to his name and takes over from previous captain Mark Van Bommel, who is not included in Van Gaal's latest squad.

He made his international debut in 2003 as a 19-year-old whilst playing for Ajax before going into a two-year spell at Real Madrid, where he won the 2008 Liga crown.

He joined Inter Milan in 2009 and helped the club win the treble in 2010 when they took the Serie A crown, Italian Cup and Champions League, ironically winning 2-0 over Bayern Munich at his former home ground in Madrid.

Comments
Topics mentioned in this article
Football Bayern Munchen Sparta Prague Napoli Galatasaray Manchester United Inter Milan Ajax Netherlands Belgium
Get the latest updates on ICC T20 Worldcup 2022 and CWG 2022 check out the Schedule, Live Score and Medals Tally. Like us on Facebook or follow us on Twitter for more sports updates. You can also download the NDTV Cricket app for Android or iOS.