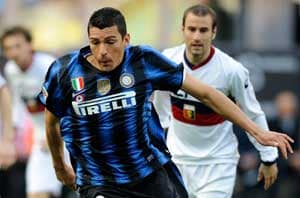 He was forced off during Friday night's 1-1 draw at Brescia and may now miss the game against his former team.

Inter are in a precarious situation having lost the first leg at home 1-0.

They are the last remaining Italian representatives in European competition this season.

Having beaten Bayern in the final in Madrid last May Inter are the reigning champions.

Comments
Topics mentioned in this article
Inter Milan Football
Get the latest updates on ICC T20 Worldcup 2022 and CWG 2022 check out the Schedule, Live Score and Medals Tally. Like us on Facebook or follow us on Twitter for more sports updates. You can also download the NDTV Cricket app for Android or iOS.