Liverpool to play in South Africa

Liverpool are the second most popular overseas club in South Africa behind arch-rivals and English champions Manchester United. 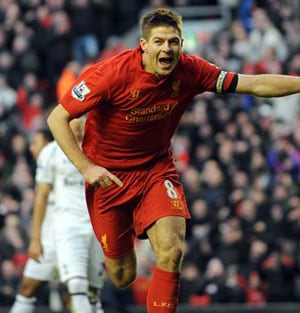 Liverpool will play a post-season friendly in South Africa -- their first match in the country in nearly 20 years -- later this month, the English Premier League club announced Monday.

The Reds will face Ajax Cape Town at the Cape Town stadium on May 21 and Liverpool's chief commercial officer, Billy Hogan, said in a statement: "It will be fantastic for the club to return to South Africa after almost twenty years."

He added: "We know we have a large fan base in South Africa which is rapidly growing, in the last eight months the number of South African fans visiting the club's website has doubled.

Liverpool are the second most popular overseas club in South Africa behind arch-rivals and English champions Manchester United and Hogan said: "This visit is part of our off-season activity and shows our commitment to bringing the club closer to our fans all over the globe, no matter how far away from Anfield they may live."

Whilst on that visit, the Liverpool party also met with then South Africa president Nelson Mandela.

Liverpool, the dominant force in English football from the mid 1970s through the 1980s, have not won a domestic title since 1990 and are currently seventh in the Premier League following Sunday's goalless Merseyside derby draw with Everton.

Comments
Topics mentioned in this article
Football South Africa Cricket Team Liverpool
Get the latest updates on ICC T20 Worldcup 2022 and CWG 2022 check out the Schedule, Live Score and Medals Tally. Like us on Facebook or follow us on Twitter for more sports updates. You can also download the NDTV Cricket app for Android or iOS.