Barcelona terrorised Eibar to reclaim their five-point cushion at the top of the table. 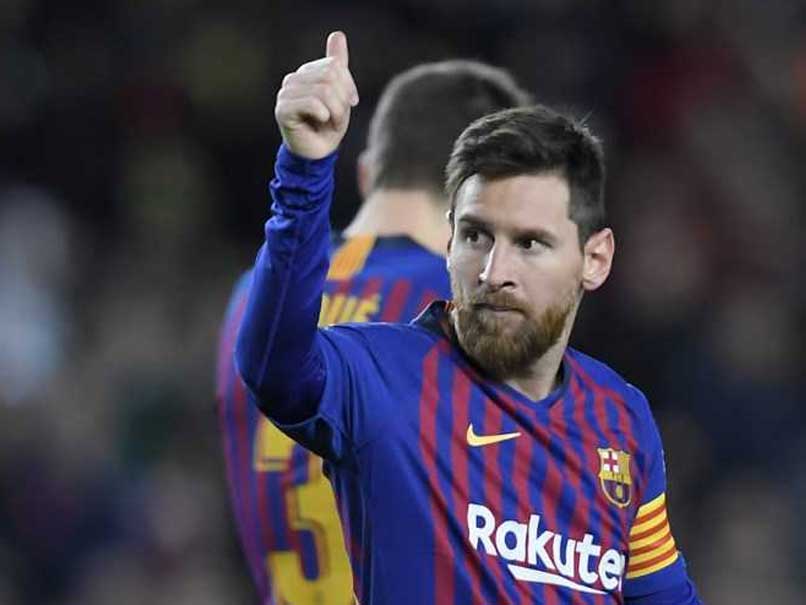 Lionel Messi scored his 400th La Liga goal on Sunday, a total his coach Ernesto Valverde called "monstrous", as Barcelona terrorised Eibar to reclaim their five-point cushion at the top of the table. Messi drove the ball into the bottom corner after being teed up by Luis Suarez, who added two goals to his own tally either side of the Argentinian marking another historic record at the Camp Nou.
"It's monstrous," said Valverde, after the 3-0 victory. "It's easy to say but you have to score them one after the other, it's a long-term job.

"His numbers are stratospheric, incredible. He is from another galaxy." Victory saw Valverde's side restore their advantage over Atletico Madrid, who had briefly cut the gap to two points after beating Levante earlier in the day.

"There is a lot of time left," Valverde said. "It is a good cushion but nothing is done yet."  Real Madrid won too, beating Real Betis, to ensure Spain's big three all prevailed in the same round for only the fourth time this season. Real remain 10 points adrift of Barcelona. Messi, meanwhile, extends his own hefty lead as the division's all-time top scorer, which currently stands at 89 goals, ahead of Cristiano Ronaldo.

Ronaldo, now at Juventus in Italy, owns a better goals-to-game ratio, with his 311 strikes coming in 292 matches. Messi's quadruple century arrived in his 435th.
In fact, it was one of Messi's quieter nights in terms of performance and in another team it might have been Suarez or Philippe Coutinho picking up the plaudits.

Suarez assisted Messi, applied a classy finish and was on the end of a scintillating team move for Barca's first.

Coutinho was the provider for that one and delivered a sparkling display to appease those doubting his future at the club. The Brazilian has endured a spell out of Valverde's preferred starting line-up but he converted a penalty against Levante in the Copa del Rey on Wednesday, and was arguably man of the match here. He alone supplied three passes in the build-up to Suarez's opener. Arthur Melo started it, playing a one-two with Coutinho and then into the feet of Sergio Busquets.

Busquets pinged the ball left to Coutinho, who twice exchanged with Suarez before the Uruguayan, off balance, found the far corner. Messi's moment came in the 53rd minute and it was Suarez who started it, stealing back possession after a heavy touch from Anaitz Arbilla. He bounced it off Coutinho and found Messi, who touched and rifled in.

Barca were enjoying themselves as Coutinho flicked the ball over one opponent's head and Suarez did the same through another's legs. The third goal was simple, however, Sergi Roberto taking a quick throw and freeing the scuttling Suarez. With the goalkeeper out, he looked up and chipped the ball into the net.

The pressure had been cranked up a notch after Antoine Griezmann's second-half penalty earned Atletico a 1-0 victory over Levante. Griezmann has now scored all of Atletico's last six goals and his latest one proved the difference in a cagey contest at the Wanda Metropolitano.

"We all pull the cart in difficult moments," Griezmann said. "I cannot do anything without my team-mates." The pressure has been on Real Madrid all season but they battled to a 2-1 win over Betis for their first league victory of 2019.

Luka Modric sent a thunderous shot into the top corner but Betis were in the ascendancy after Sergio Canales poked in a second-half equaliser.

Marcelo had been dropped by Santiago Solari, Karim Benzema taken off with a dislocated finger and Isco remained on the bench, watching three youngsters sent on ahead of him. Ceballos, who left Betis for Madrid two years ago, was one of them.

With a free-kick on the edge of the area and goalkeeper Pau Lopez leaving his left-hand corner open, Ceballos duly sent a dipping shot into the gap to snatch a dramatic win.

"It was an emotional moment for him," Solari said. "A former player doing damage, football creates this kind of magic."