Sunil Chhetri gave India the lead against Thailand in their opening clash of the AFC Asian Cup 2019. 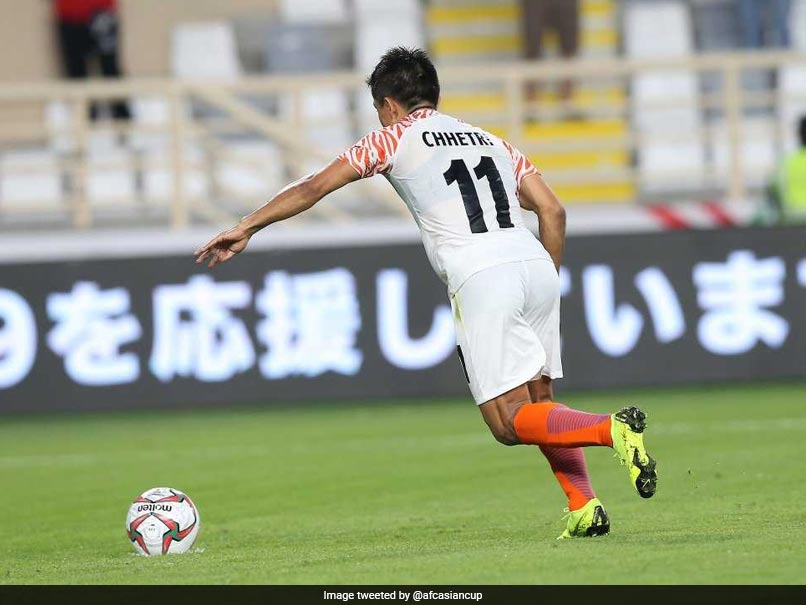 Sunil Chhetri stood up to the occasion as he scored from the spot in the 27th minute to give India the lead against Thailand in their opener of the AFC Asian Cup 2019 at the Al Nahyan Stadium in Abu Dhabi. The strike helped 34-year-old Sunil Chhetri (67 goals) overtake Argentine superstar Lionel Messi (65) to become the second-highest international goal scorer among the active players. Chhetri achieved this feat while playing his 104th match. However, the Indian talisman's opening goal of the match was cut short by an equaliser from Teerasil Dangda in the 33th minute. As a result of the equaliser, both the teams headed into the tunnel at half-time all-square.

The official Twitter handle of the AFC Asian Cup also took note of Chhetri's achievement and said, "Sunil Chhetri scores his 66th with India to overtake Lionel Messi becoming the active player with the 2nd most international goals."

Sunil Chhetri scores his 66th with India to overtake Lionel Messi becoming the active player with the 2nd most international goals pic.twitter.com/4EaDP8IeqK

In the second-half Chhetri scored his second goal of the match in the 46th minute to help India re-gain the lead. With the strike, Chhetri is only behind Portuguese talisman Cristiano Ronaldo, who has scored 85 times for the national team.

In the 69th minute, Anirudh Thapa scored the third goal for India to put some daylight between themselves and the opposition.

There was no stopping for the 97th ranked Indian team from there on, as Jeje Lalpekhlua who came as a substitute, scored in 80th minute with a brilliant lob, to put the match to bed.

India, who had only 34 per cent possession in the match, thrashed Thailand 4-1, to take all three-point and take pole position in Group A.

However, the Indian team coach Stephen Constantine had picked goalkeeper Gurpreet Singh Sandhu as the captain of the fixture, ahead of Chhetri.

Meanwhile, in the other fixture of Group A, hosts United Arab Emirates played out a 1-1 draw against Bahrain yesterday.