Lionel Messi helped Argentina cement a place in the automatic qualification berths of South America's round-robin competition for the 2018 World Cup with 11 points from six games. 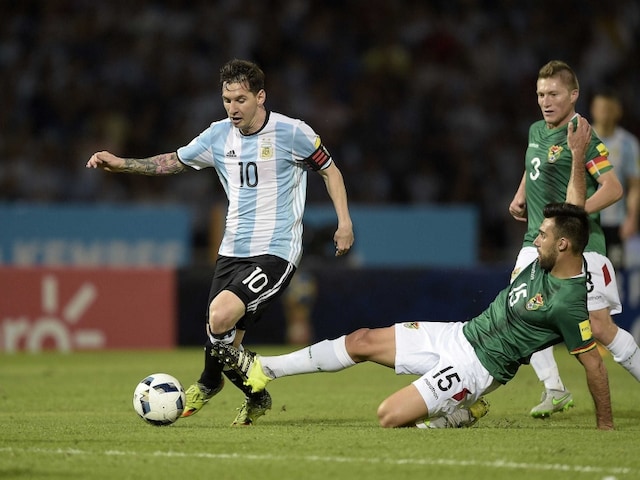 Lionel Messi is now closing in on Gabriel Batistuta's record of 56 goals for Argentina, set between 1991 and 2002.© AFP

Messi's spot-kick followed defender Gabriel Mercado putting Argentina ahead after 20 minutes with his second goal in as many games.

The victory cements Argentina's place in the automatic qualification berths of South America's round-robin competition with 11 points from six games.

Messi's penalty makes him only the second player in Argentinian history to reach a half century of goals for the two-time World Cup winners.

The 28-year-old striker is now closing in on legendary scorer Gabriel Batistuta's record of 56 goals set between 1991 and 2002.

Messi now also needs only one more goal to reach 500 goals for club and country -- raising the prospect that he could achieve that milestone with Barcelona this weekend when the Spanish giants take on Real Madrid in the El Clasico.

Messi, meanwhile, was satisfied with yet another Argentina win, which suggests their troubled start to qualifying -- which began with a shock 2-0 home defeat to Ecuador -- is firmly in the rear view mirror.

"Beating Bolivia and Chile is what we wanted," said Messi, referring to last week's hard-fought win over the Chileans in Santiago.

"We've come from a low position in the standings to a high one but there is still a long way to go," Messi added.

Messi, meanwhile, said Argentina's game had been hampered by the poor condition of the surface at the Mario Kempes stadium, which has hosted rock concerts recently.

"We tried to play our game but the surface didn't help, although that's not an excuse," he said.

Argentina coach Gerardo Martino -- who had faced calls to quit after last year's Copa America defeat -- said his team would embark on their remaining qualifiers with confidence.

"A third straight victory gives us tranquility. We are in a good position now," Martino said.

Comments
Topics mentioned in this article
Argentina Gabriel Mercado Lionel Messi Football
Get the latest Cricket news, check out the India cricket schedule, Cricket live score . Like us on Facebook or follow us on Twitter for more sports updates. You can also download the NDTV Cricket app for Android or iOS.