Lionel Messi on shortlist for FIFA goal of the year 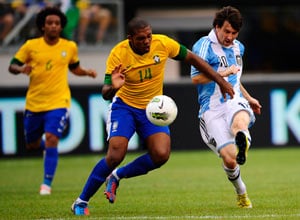 Lionel Messi's stunning solo strike in Argentina's 4-3 win over Brazil in June is among the 10 nominations for the FIFA goal of the year.

Goals by Colombia striker Radamel Falcao, Brazil forward Neymar and France playmaker Hatem Ben Arfa are also on the shortlist, which will be reduced to three on November 29 following a public vote on the websites of FIFA and France Football magazine.

The winner of the FIFA Puskas Award, named after Hungarian great Ferenc Puskas, will be revealed on Jan. 7 at the Ballon d'Or gala in Zurich.

Neymar won the 2011 award and will look to retain the prize courtesy of his goal for Santos against Internacional on March 7, when he scored following a maze of dribbling from mid-field.

Comments
Topics mentioned in this article
Football Brazil Uruguay Mexico South Africa Republic of Ireland FIFA France Lionel Messi
Get the latest Cricket news, check out the India cricket schedule, Cricket live score . Like us on Facebook or follow us on Twitter for more sports updates. You can also download the NDTV Cricket app for Android or iOS.