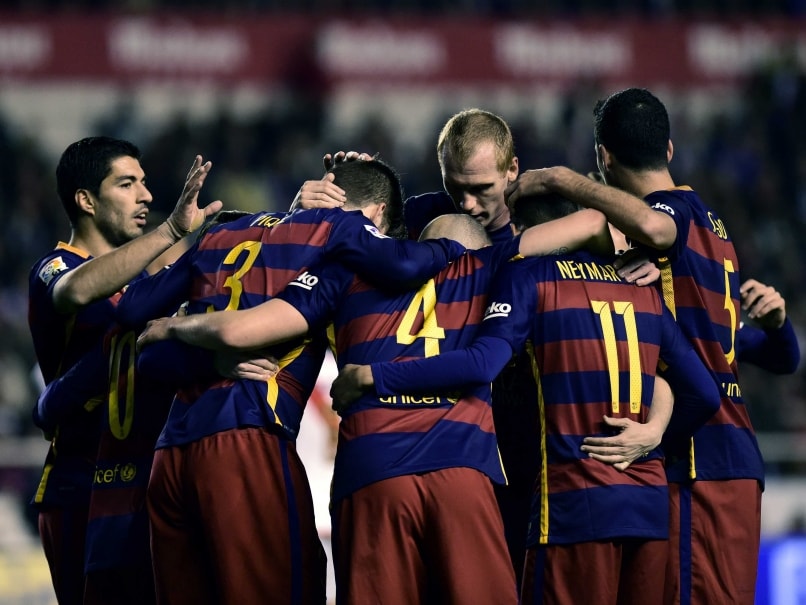 Lionel Mess scored a hat-trick while Ivan Rakitic and Arda Turan scored a goal each to complete the rout.© AFP
Barcelona:

Lionel Messi scored a hat-trick as FC Barcelona took another step towards the La Liga title and set a new Spanish football record of 35 games unbeaten in the process with a 5-1 win at nine-man Rayo Vallecano on Thursday. (Barcelona Equal Spanish Unbeaten Record)

Two goals in as many minutes midway through the first-half killed the game as a contest as Ivan Rakitic and Messi netted before Diego Llorente saw a straight red card for a high challenge on Rakitic. ('Arsenal Must Be Ruthless Against FC Barcelona')

Messi completed his hat-trick after Manucho's consolation for Rayo.

Luis Suarez also missed a penalty after Manuel Iturra was also sent-off for the hosts before Arda Turan rounded off the scoring with his first Barca goal.

"We played very well and when we are at this level in terms of attitude and intensity, it is very hard for the opponents," said Barca boss Luis Enrique.

Rayo were unbeaten in their seven league games themselves and forced Barca 'keeper Claudio Bravo into a smart early save as the Chilean international flew to his right to turn away Adrian Embarba's drive.

However, Rayo's high defensive line was offering plenty of encouragement to the European champions and it seemed only a matter of time before Barca took advantage as Carlos made a good save at his near post to deny Messi.

The opener arrived in unusual fashion for Barca, though, as an aimless ball punted into the box was dropped by Carlos and Rakitic was on hand to sweep into an empty net

The visitors' second two minutes later was straight out of the Barca textbook, though, as a brilliant one-two between Neymar and Messi freed the Argentine to slot home from close range.

Llorente let Rayo's frustration boil over three minutes before the break when he lunged in studs up on Rakitic and was rightly shown a straight red card.

Messi piled on further punishment for the hosts when he casually rolled the ball home after Suarez had smashed against the post soon after the restart.

Yet, the hosts momentum was short-lived as they were reduced to nine men when Iturra chopped down Sergio Busquets inside the area after Neymar's free-kick had come back off the crossbar.

Messi passed up the chance to seal his hat-trick to help Suarez in his battle with Cristiano Ronaldo to be La Liga's top scorer.

However, Barca's awful record from the spot this season continued as Carlos made amends for his earlier error with a fine save.

The five-time World Player of the Year had to wait just three minutes more to get his third of the night as Messi sauntered through on goal before slotting past the advancing Carlos.

And Turan rounded off a perfect evening for Luis Enrique's men when he headed home from Jeremy Mathieu's cross five minutes from time.

Rayo are now just above the drop zone on goal difference as Granada struck twice in the final 20 minutes through Youssef El Arabi and Isaac Success to beat Sporting Gijon 2-0.

Real Betis also eased their relegation fears as they took advantage of an Espanyol side ravaged by gastroenteritis to win 3-0.

Comments
Topics mentioned in this article
Barcelona Rayo Vallecano Lionel Messi Neymar Luis Suarez Football
Get the latest updates on ICC T20 Worldcup 2022 and CWG 2022 check out the Schedule, Live Score and Medals Tally. Like us on Facebook or follow us on Twitter for more sports updates. You can also download the NDTV Cricket app for Android or iOS.