Lionel Messi has been in open conflict with his club but it had no detrimental effect on his form as his 13th minute penalty was the difference in a tight encounter. 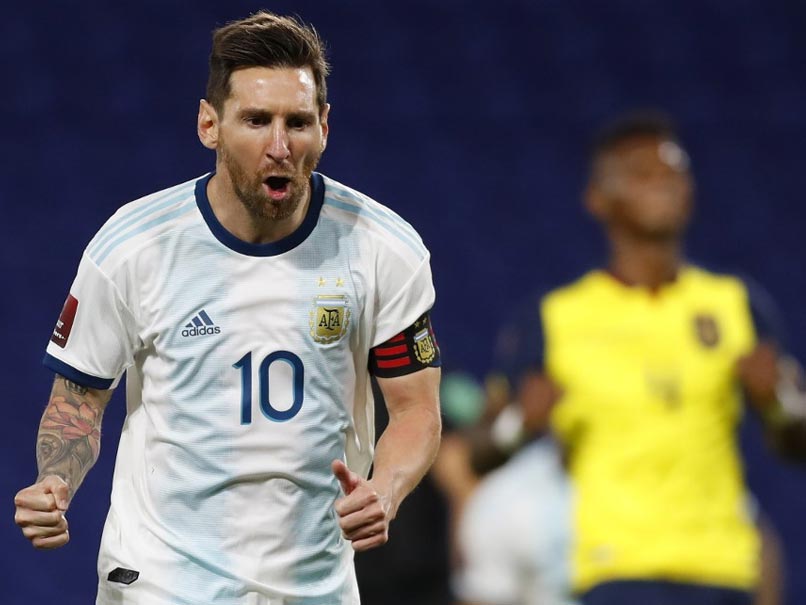 Lionel Messi put his Barcelona troubles behind him to fire Argentina to an opening 1-0 win vs Ecuador.© AFP

Lionel Messi put his Barcelonatroubles behind him to fire Argentina to an opening 1-0 victory over Ecuador in World Cup qualifying on Thursday. The 33-year-old great has been in open conflict with his club but it had no detrimental effect on his form as his 13th minute penalty was the difference in a tight encounter. The six-time Ballon d'Or winner unsuccessfully tried to force his way out of the Catalan giants in the close season but he seemed much happier in the light blue and white jersey of his country.

And Argentina needed him to be on top form in a bid to avoid slipping up at home to Ecuador for the second successive time in an opening World Cup qualifier having lost 2-0 to the same opponents four years ago.

In the surreal atmosphere of an empty Bombonera -- the iconic stadium in Buenos Aires that is usually bouncing from the passion of fervent fans was left barren by coronavirus restrictions -- Argentina never looked in danger of another shock defeat.

The hosts predictably dominated possession but struggled to break down an organized and physical Ecuador outfit that proved a different proposition to the one dispatched 6-1 in a friendly a year ago.

The breakthrough came after a reckless challenge by Pervis Estupinan sent Lucas Ocampo sprawling in the box, with Messi stepping up to lash home his 71st international goal.

Ocampos was presented with a glorious chance to double the lead early in the second half but goalkeeper Alexander Dominguez dived full length to keep out his low shot from eight yards.

Rodrigo De Paul fired narrowly wide for the hosts with the last kick of the match.

Atletico Madrid forward Suarez opened the scoring from the penalty spot on 39 minutes after Sebastian Vegas was harshly penalized for handball.

Inter Milan's Alexis Sanchez equalised with a low shot on 54 minutes but Gomez had the last word with a stunning half-volley from 20 yards to complete the 2-1 win.

It was honors even between Paraguay and Peru in Asuncion as Angel Romero for the hosts and Andre Carrillo both scored a brace.

Luis Suarez Football
Get the latest updates on Fifa Worldcup 2022 and check out  Fifa World Cup Schedule, Stats and Live Cricket Score. Like us on Facebook or follow us on Twitter for more sports updates. You can also download the NDTV Cricket app for Android or iOS.