Ligue 1: PSG grind out win over Toulouse to move top

With an eye on PSG's midweek Champions League tie against Benfica, Laurent Blanc chose to rotate his squad as he made seven changes to the team that beat Valenciennes 1-0 on Wednesday. 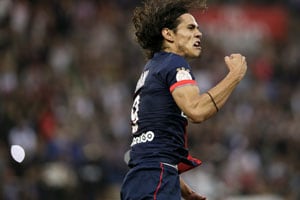 French champions Paris Saint-Germain maintained their unbeaten start to the season as they ground out a 2-0 victory over Toulouse on Saturday to provisionally move top of Ligue 1.

Teenage defender Marquinhos netted his first goal in the French top flight four minutes prior to half-time at the Parc des Princes before Edinson converted a late penalty to send PSG a point clear of Monaco, who travel to Reims on Sunday, at the summit.

With an eye on PSG's midweek Champions League tie against Benfica, Laurent Blanc chose to rotate his squad as he made seven changes to the team that beat Valenciennes 1-0 on Wednesday.

Goalkeeper Salvatore Sirigu was called into action early on as he dived to his left to claw away a header from Toulouse midfielder Etienne Didot, who was fortunate not to concede a penalty on the half-hour after handling from a corner.

A dour first half then came to life just before the interval as Marquinhos put the home side in front, stabbing home from close range at the second attempt after Ali Ahamada had saved brilliantly from the Brazilian central defender.

Aymen Abdennour almost replied immediately for the visitors but Marco Verratti was on hand to hack the Tunisian defender's strike off the line.

Adrien Rabiot, who spent the second half of last season on loan at Toulouse, almost doubled PSG's lead midway through the second half but saw his header bounce back off the inside of the post.

However, substitute Cavani put the game out of reach on 79 minutes after the hosts were awarded a dubious penalty.

Cavani went down under a challenge from Uros Spajic with the referee pointing to the spot despite replays indicating the Serbian centre-half had got a clear touch on the ball.

Unfazed by Toulouse's protests the Uruguayan dusted himself down and calmly stroke home the spot-kick to take his season's tally to four.

Earlier, Marseille warmed up for their Champions League trip to Borussia Dortmund by winning 2-0 at Lorient.

After a first half of few chances in Brittany, OM got the breakthrough just before the hour mark when the excellent Mathieu Valbuena netted from a free-kick just over 20 yards out.

The little French international had scored the only goal when OM won at the Stade du Moustoir last season and it looked as if his latest strike would secure an identical result this time.

However, as Lorient pressed forward in search of an equaliser, Marseille made certain of the points in stoppage time, Andre Ayew firing low past goalkeeper Fabien Audard at his near post for his first goal of the campaign.

The win was Marseille's second in five days following their 2-1 victory at home against Saint-Etienne in midweek and left them third, a point adrift of PSG and behind Monaco only on goal difference.

Marseille travel to Dortmund on Tuesday looking for their first points in Champions League Group F after losing 2-1 at home to Arsenal in their opening game.

Comments
Topics mentioned in this article
Zlatan Ibrahimovic David Beckham Javier Pastore Etienne Capoue Moussa Sissoko Paris SG Marseille Football
Get the latest updates on ICC T20 Worldcup 2022 and CWG 2022 check out the Schedule, Live Score and Medals Tally. Like us on Facebook or follow us on Twitter for more sports updates. You can also download the NDTV Cricket app for Android or iOS.