Celtic manager Neil Lennon and Rangers assistant Ally McCoist are facing touchline bans after being charged with misconduct by the Scottish Football Association (SFA) on Thursday. 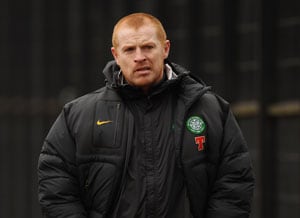 Celtic manager Neil Lennon and Rangers assistant Ally McCoist are facing touchline bans after being charged with misconduct by the Scottish Football Association (SFA) on Thursday.

Lennon and McCoist incurred four and two-match touchline bans respectively for their altercation at the final whistle of last Wednesday's Scottish Cup fifth round replay, which Celtic won 1-0.

However Lennon could be missing for a total of eight matches because he was already subject of a four-match ban which has banished him to the stands for the March 20 League Cup final against Rangers at Hampden Park.

Rangers' Senegalese forward El-Hadji Diouf, who was red-carded after the final whistle of the Cup replay, and his Rangers team-mate Madjid Bougherra, sent off during the game, have also been reported to the SFA's disciplinary committee for "misconduct of a significantly serious nature".

Three Rangers players - Steven Whittaker was the other - were dismissed by referee Calum Murray.

A Scottish FA statement read: "The Scottish FA can confirm that Neil Lennon, the Celtic manager, and Ally McCoist, the Rangers assistant manager, have been charged with misconduct relating to the Scottish Cup fifth-round replay.

"In addition, the Rangers players, El-Hadji Diouf and Madjid Bougherra, have been informed that they will be reported to the disciplinary committee for misconduct of a significantly serious nature. These will be considered at the committee's next meeting, on April 12."

Lennon and McCoist clashed and had to be separated at the same time Rangers forward Diouf, booked earlier in the match for a touchline confrontation with the Celtic boss, was being shown a second yellow card by referee Calum Murray for dissent.

The Ibrox club had finished the game with nine men after the first-half dismissal of Whittaker for picking up two yellow cards with defender Bougherra receiving his marching orders in stoppage time after a challenge on Kris Commons, having been booked earlier.

Bougherra reacted angrily and tried to prevent referee Murray from showing his cards.

Strathclyde Police requested Scotland's First Minister Alex Salmond host an Old Firm summit in the aftermath of the match and on Tuesday Celtic and Rangers agreed to an action plan in an effort to avert repetitions of the bad behaviour on and off the field.

Speaking in Edinburgh on Tuesday, Celtic chief executive Peter Lawwell and his Rangers counterpart Martin Bain said the clubs had moved on from the match.

Lennon has had to contend with being sent sinister packages this season, however his agent Martin Reilly insisted that quitting was not on the agenda for the northern Irishman.

The sixth Old Firm derby of the season will take place at Hampden a week on Sunday, with the League Cup at stake, while there will be a further fixture in the Premier League, with that title also at stake.

Comments
Topics mentioned in this article
Football Celtic
Get the latest updates on ICC T20 Worldcup 2022 and CWG 2022 check out the Schedule, Live Score and Medals Tally. Like us on Facebook or follow us on Twitter for more sports updates. You can also download the NDTV Cricket app for Android or iOS.