Leicester City's final home game against Everton presents an opportunity for players, staff and supporters to unite in communal celebration of a feat that has captivated fans around the world 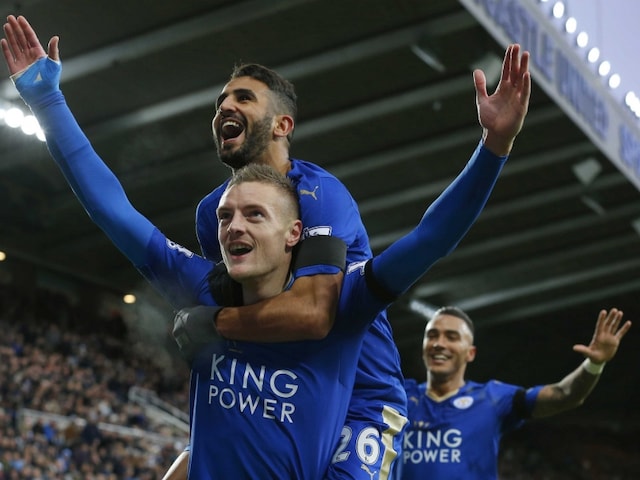 Leicester City will welcome back 22-goal top scorer Jamie Vardy after he was suspended for the win over Swansea City and last weekend's draw at Manchester United.© AFP

The King Power Stadium will stage Leicester City's coronation as Premier League champions on Saturday when Claudio Ranieri's miracle team receive the trophy after their final home game against Everton.

Tottenham Hotspur's 2-2 draw at Chelsea on Monday, which confirmed Leicester's extraordinary 5,000-1 success, sparked jubilation in the streets of Leicester and a party at the home of star striker Jamie Vardy, where the players had gathered to watch the match.

The festivities have continued across the week, with the squad dining out at a city-centre restaurant on Tuesday, but Saturday's game presents an opportunity for players, staff and supporters to unite in communal celebration of a feat that has captivated fans around the world.

Ranieri has admitted that he is torn between urging his team to power over the line and wanting to enjoy the moment, saying on Thursday: "Inside me there are two people.

"Another says: 'Claudio, how many managers are there in the world? Too many. Not everyone can be Sir Alex Ferguson, (Fabio) Capello, (Carlo) Ancelotti. You are having a very good career.'"

The renowned Italian tenor Andrea Bocelli will set the tone with pre-match renditions of 'Nessun Dorma' and 'Time to Say Goodbye', honouring a recent promise to his countryman Ranieri.

After the match, the trophy will be presented to Leicester captain Wes Morgan by lifelong supporter Steve Worthy, who won a competition organised by league sponsors Barclays.

He is dedicating the experience to his 97-year-old grandmother, Gladys Knight, who had to forfeit her season ticket this season due to ill health.

"When I hand the Premier League trophy to Wes Morgan I'll be thinking of my grandmother," Worthy said.

The 25kg trophy, topped by a golden crown, will be decorated with ribbons of blue, for Leicester, and yellow, representing the royal house of Thailand, which is the country of club owners King Power.

Morgan will become the first Leicester skipper to hoist a major trophy since Matt Elliott lifted the League Cup 16 years ago and the 32-year-old centre-back has already been picturing the moment.

"I am going to try to hold back the tears," said the Jamaica international, a Leicester player for four years.

"It is going to be very emotional."

On the pitch, Leicester will welcome back 22-goal top scorer Vardy after he was suspended for the 4-0 win over Swansea City and last weekend's 1-1 draw at Manchester United, which took Ranieri's men to the brink of glory.

While there is nothing riding on the game for either side, Vardy has an opportunity to close the three-goal gap separating him from Tottenham's Harry Kane in the race for the Premier League Golden Boot.

Midfielder Danny Drinkwater and centre-back Robert Huth are both suspended over offences committed at Old Trafford, the latter having received a three-game ban for elbowing Marouane Fellaini, ending his season.

Andy King and Marcin Wasilewski are expected to deputise and Ranieri may use the opportunity to give game-time to other players who have played supporting roles in the campaign.

Everton's season was ended by their 2-1 loss to Manchester United in the FA Cup semi-finals and their last three matches represent something of a gauntlet for manager Roberto Martinez, who has faced open revolt from his own supporters in recent games.

But last weekend's 2-1 victory over Bournemouth brought an end to a seven-game winless streak and despite the anticipated festive atmosphere, Martinez has urged his players to make their presence felt.

"Clearly they (Leicester) are going to be playing with swagger," said the Spaniard, whose side can finish no higher than ninth in the table.

"We'll congratulate them and from that point on we'll focus on trying to perform against them."

Comments
Topics mentioned in this article
Leicester City Everton Jamie Vardy Wes Morgan Football
Get the latest Cricket news, check out the India cricket schedule, Cricket live score . Like us on Facebook or follow us on Twitter for more sports updates. You can also download the NDTV Cricket app for Android or iOS.