Spurs' reward was a home tie with West Ham United in the quarter-finals, while Manchester City will travel to second-tier Leicester City. 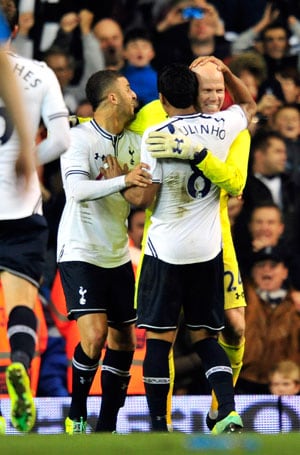 Hull had lost 1-0 to Spurs in the Premier League on Sunday and they came within a whisker of exacting swift revenge on their return to White Hart Lane.

Icelandic midfielder Gylfi Sigurdsson was one of eight players brought into the Spurs team and he made a stunning impact in the 16th minute, flummoxing his marker with a neat drag-back and then arrowing a sumptuous shot into the top-left corner from 25 yards.

Second-choice Spurs goalkeeper Brad Friedel made a less favourable impression, however, gifting Hull an equaliser in the 53rd minute.

Liam Rosenior's low cross from the right was hooked back across goal by the sliding Curtis Davies and Friedel inadvertently fumbled the ball into the net for an own goal.

Spurs saw 20-year-old midfielder Harry Kane rattle the woodwork from 20 yards in stoppage time, but it was Hull who struck first in extra time, with Paul McShane heading home from a George Boyd corner.

Kane would not be discouraged, however, and he drilled home a 108th-minute equaliser to make it 2-2 and send the game to penalties.

Aaron McLean missed for Hull before Spurs' record signing Erik Lamela fluffed his lines for the hosts, but Friedel had the final say, blocking with his legs from Ahmed Elmohamady to secure a nail-biting win.

"If you want to see predictable endings or happy endings, you go to the opera or the theatre. In football, you don't know what is going to happen. I couldn't be happier."

Spurs' reward was a home tie with West Ham United, while Manchester City will travel to second-tier Leicester City after Alvaro Negredo and Edin Dzeko struck in extra time in a 2-0 win at Newcastle.

City made 10 changes to the team beaten 2-1 at Chelsea on Sunday, with Javi Garcia the only player to keep his place, while Newcastle manager Alan Pardew brought five new players into his starting XI.

There was an early blow for the visitors when Montenegrin forward Stevan Jovetic had to go off in the 10th minute following a challenge by Mike Williamson, with Negredo coming on in his place.

Newcastle enjoyed the best of the first half, but Yoan Gouffran was thwarted by City goalkeeper Costel Pantilimon and Shola Ameobi had a goal ruled out for offside, while Vurnon Anita volleyed just wide.

City upped the tempo after the interval, with James Milner and Negredo both going close, and it was the latter who broke the deadlock in the ninth minute of extra time, sweeping home a low cross from Dzeko.

Dzeko got on the scoresheet himself moments later, skirting Krul and rolling the ball home to rubberstamp City's place in the last eight for the fourth time in seven years.

On the prospect of facing Leicester, he added: "I'm not thinking it's an easy tie. Leicester continue in this cup because they beat Fulham and that is not an easy team, so we suppose we will have a very difficult match and if we want to win, we will have to play very well."

The draw for the quarter-finals also handed Manchester United an away game at Stoke City, who were beaten 3-2 at Old Trafford in the league on Saturday.

Chelsea will visit the victors of the one remaining fourth-round tie between Sunderland and Southampton, which is due to be played next Wednesday.

Comments
Topics mentioned in this article
Football Spain Italy Bayern Munchen Arsenal Manchester City Newcastle United Sevilla Manchester United Alvaro Negredo Wayne Rooney Gylfi Sigurdsson
Get the latest updates on ICC T20 Worldcup 2022 and CWG 2022 check out the Schedule, Live Score and Medals Tally. Like us on Facebook or follow us on Twitter for more sports updates. You can also download the NDTV Cricket app for Android or iOS.