La Liga: For an incoming regime in FC Barcelona, there would be no stronger vote of confidence than Lionel Messi's signature on a new deal. 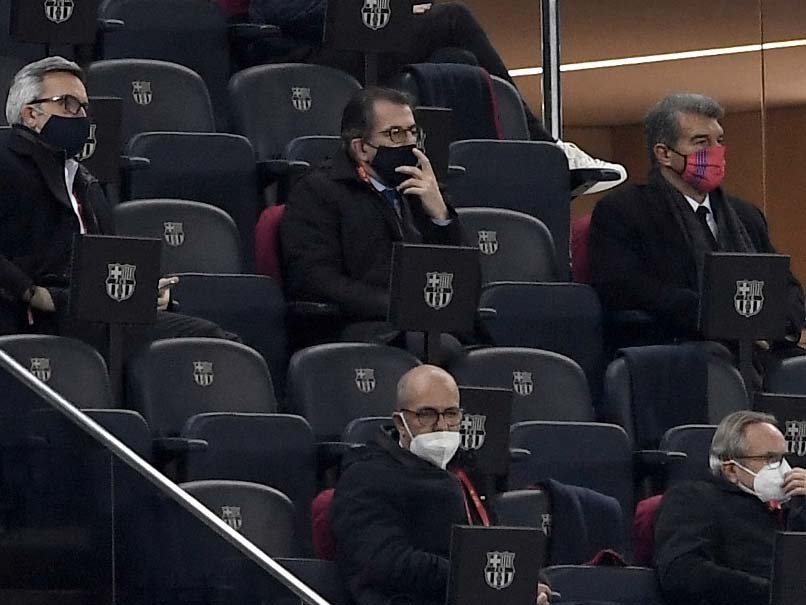 The week that began with the former president in prison will end with a new president in power as Barcelona hope Sunday's elections can be a turning point for a club seemingly locked in crisis. Joan Laporta, Victor Font and Toni Freixa were all at Camp Nou on Wednesday to see Barca stage a dramatic comeback against Sevilla, overturning a 2-0 deficit in extra-time to reach the final of the Copa del Rey. But whoever is voted in by Barcelona's 110,000 members has a much tougher 'remontada' to pull off, faced with a club in crippling debt, whose greatest player could be about to leave and whose reputation has been repeatedly dragged through the mud.

Rock bottom perhaps came on Monday when the club's former president Josep Maria Bartomeu, forced to resign in October, was arrested, spending the night behind bars after Catalan police raided offices at Camp Nou as part of an investigation into corruption and misuse of funds.

"For the image of the club it is not good," said coach Ronald Koeman on Tuesday.

It could also have been last August when Lionel Messi, who joined Barcelona as a 13-year-old boy and became their greatest ever, tried to leave for free, citing a clause in his contract and a club that had "no project or anything for a long time".

Or even a month before, when they were demolished by Bayern Munich, an 8-2 defeat in the Champions League the club's worst ever loss in Europe, an epic humiliation made more deflating only by the fact so many had expected it.

There was also a first season without a trophy in 12 years, consecutive losses to Real Madrid, public rows over pay cuts and six board members who resigned. In any other year, they all could have been definitive failures.

"Nobody can deny the current crisis is the result of bad government and outdated leadership," wrote Ernest Folch on Thursday in Diario Sport. "Barca can finally wipe the slate clean."

For Laporta, Font or Freixa there will be no quick fix, no sponsorship deal or game-changing signing that can wash over a crisis caused by years of mismanagement, misspending and mistrust.

There could also be more upheaval to come. With a new president, Koeman's job as coach immediately becomes uncertain, despite the Dutchman overseeing a broadly encouraging season that could still end with victory in the Copa del Rey and perhaps La Liga, if Atletico Madrid lose their nerve.

Font, in particular, has floated his campaign on the idea he could bring Xavi Hernandez in as coach.

Decisions will also have to be made on veterans like Sergio Busquets, Jordi Alba and Gerard Pique, who have given the club so much but whose peaks years are clearly behind them.

And if some departures come with sadness, others would bring relief, even if finding buyers for the likes of Philippe Coutinho, Samuel Umtiti, even Antoine Griezmann, will prove difficult in a market depressed by the pandemic.

To ease the club's gross debts of 1.2 billion euros ($1.44 billion), the new president will be counting down the days until fans return to the stadium and club shops, but they will have to be creative too.

Laporta insists the renovation of Camp Nou must be a priority while Font has talked about a 100-day "crash plan" and the need to make better commercial use of Barca's international audience. Freixa has said he already has a shirt sponsorship deal in place worth 60 million euros per season.

They will all know the quickest way to save money would be to release Messi, whose contract costs Barcelona 139 million euros a year, according to details published by El Mundo in January.

"Economically speaking, I would have sold Messi in the summer," said Carles Tusquets, the president of the club's interim committee, to RAC1 in December.

Messi's departure could allow others to step forward while at the same time facilitating a shift to a more dynamic, vertical Barcelona, in line with the mode of Europe's current elite.

Or he could be part of the revival, a leader for the next generation, convinced to stay by the ambition of a new project, president and, perhaps, coach.

For an incoming regime, there would be no stronger vote of confidence than Messi's signature on a new deal.

Whatever happens, a resolution to Messi's future will at least be a solution, allowing Barcelona finally to unite again under a renewed sense of direction. At the very least, new leadership brings hope.